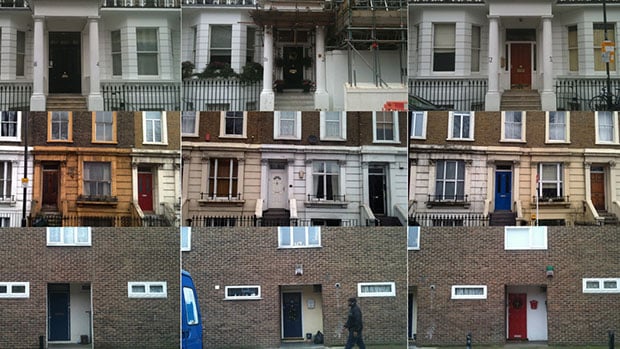 When photographer Callum Cooper moved from Melbourne, Australia to London, England, one of the things that caught his eye was the uniformity (or “conformity”) seen in the city’s residential areas. Along a street, multiple buildings would have exactly the same architecture, and if it weren’t for the minor differences in the facades, some of them can hardly be distinguished from one another.

Cooper then came up with the idea of exploring this phenomenon using photographs — photos that would become a “structuralist film.”

The photographs were shot using an ordinary iPhone. Cooper chose the device as his camera due to the fact that its resolution was “enough” and that he would be able to carry it with him as he explored the city on bike and on foot over the course of a year.

To align photographs of different buildings with one another, Cooper came up with the idea of placing a clear sheet over his iPhone screen and using a marker to draw positions of windows and doorways. This allowed him to perfectly align his shots prior to shooting them, saving him the pain of having to align everything during post-production. 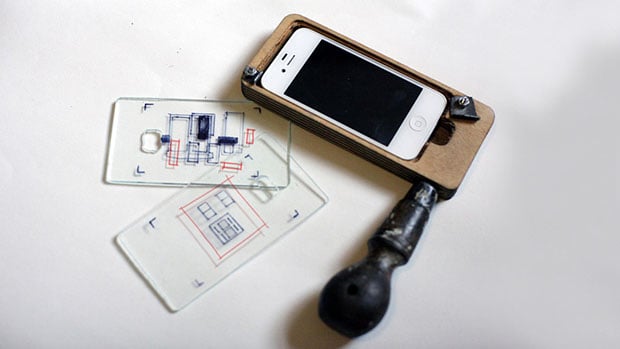 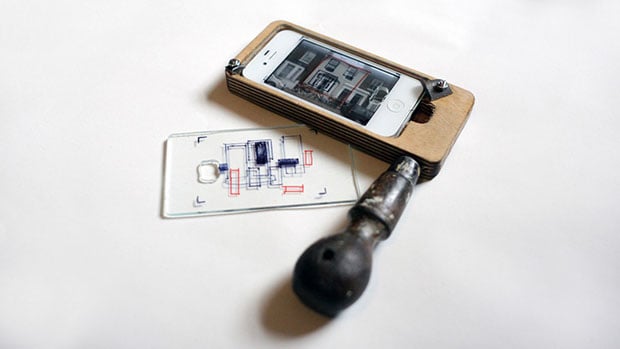 Cooper ended up shooting 3600 individual photographs over a 9 month span. He then arranged the stills by geographical order, starting from his home in East London and traveling west to the to the Royal College of Art in Kensington, and combined them into this 25FPS visual journey:

Cooper says his goal with the project is to explore the “faces of class, wealth, history and tensions between individualism and conformity in British society”:

[…] the film was given the title Victoria, George, Edward and Thatcher to reflect both the powerfully influential sociopolitical periods and their associated architectural manifestations. Victorian, Georgian and Edwardian period homes are common across what was the British Empire however Thatcherite homes are quintessentially British. This is a title given to homes that were originally government owned which became available for purchase through the introduction of the Thatcher government’s “right to buy” policy.

I decided to release the work online on the day of Thatchers funeral.

Cooper tells us that this film is simply one in a series of “taxonomical films” he’s working on.

P.S. Cooper is the same artist who captured what jumping rope looks like from the rope’s point of view.

Image credits: Photographs and video by Callum Cooper and used with permission