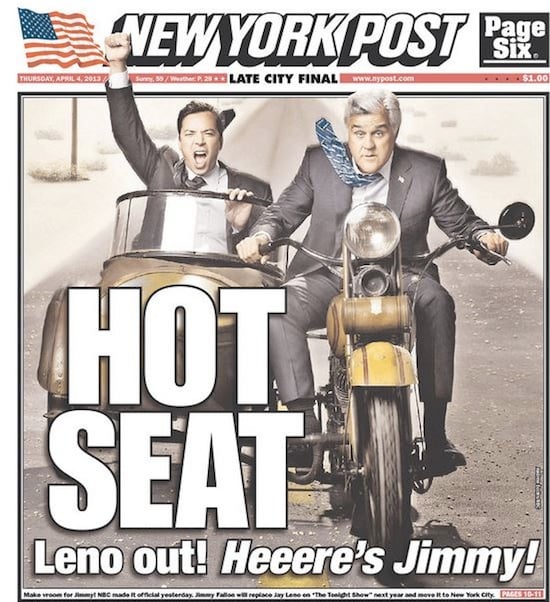 NBC recently received some criticism for distributing the above photo of Jay Leno and Jimmy Fallon to several news outlets — some of which used it on their front page — without disclosing that the background and road in the image were fake. Being an entertainment outlet, however, they were granted a pass; the fakery was obvious and it was the news outlet’s job to figure it out and disclose it to their readers.

But one particular newspaper has drawn more fire than the rest. The New York Daily News was one of the papers that used the photo on their front page, but on top of not disclosing the initial fakery, they further ‘shopped the photo and kept that part to themselves as well. As you can see, Fallon has had a stack of money digitally placed in his lap, some of which is flying out behind him. And while the online versions of the cover found on Newseum does contain both a disclosure and photo credits, according to iMediaEthics, the print version does not:

Using a composite image on the front page isn’t new. In fact, The New York Post was criticized for doing just that less than a month ago. But doing it without proper disclosure of the picture as an “illustration” or “composite” is, at the very least, frowned upon. The Daily News has yet to comment on the matter.

Photographing Some of the World’s Best Kayakers with Tim Kemple