Social photo sharing, especially where location services are involved, is tricky. As we saw with the Color app debacle, privacy concerns rule all and no amount of pre-release hype and funding can overcome those. Still, as TechCrunch columnist MG Siegler said on his blog, “a killer social photo album service” should exist, and Albumatic is making a bid for that designation.

The app seems to be a hybrid between two apps we’ve covered before: the previously mentioned Color and Bump’s app Flock. It takes the location-based social sharing functionality of Color and puts it together with the friends-only privacy we see in Flock. 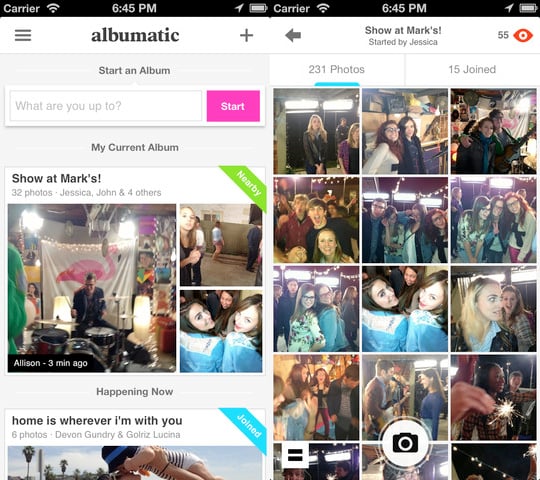 Once you’ve downloaded the app, you can start an album that friends nearby can join and friends far away can track. Over time as many friends as have the app and are in the vicinity can contribute to the album, while far away friends can keep tabs on your adventures and contribute to the conversation.

Here’s a short Albumatic ad that shows how the app does its thing:

Ignoring the fact that the guy with the broken leg was playing an N64, the ad does show off the app’s potential. If you get enough people involved, it could make for a really interactive and fun social photo album experience. Like all sharing apps, however, Albumatic’s usefulness will depend entirely on how many friends you get to download and use it.

To learn more or snag your own free copy for iOS (no Android version yet), head over to the iTunes Store by clicking here.