Check out this one-of-a-kind music video for the song “Could Be Me” by the band Gunnar and The Grizzly Boys. The video is titled “Redneck Country Band Ambushes Google Street View Car!,” and appears to be a music video shot entirely through the cameras of Google’s Street View cars. 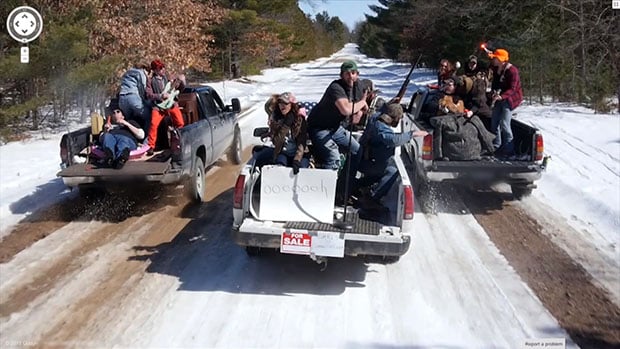 The claim is that the band “ambushed” a Google Street View car as it was driving on a particular road, and that the band was able to stay in front of the car and have portions of the lyrics captured in the shots.

Here’s what the description of the video says:

To protect our friends at Google who bent the rules to make this video possible (and their jobs), we can’t disclose when and where this was filmed.

It seems there’s a good chance the whole thing is a hoax and simply a clever marketing stunt. The video was created by marketing agency Rob Bliss Creative. Google takes privacy very seriously, and none of the faces in the video were blurred by Google’s automatic face blurring system.

Was it faked? Did they somehow “borrow” a Street View car? We have no idea, but the whole concept of doing a video in the style of browsing Google’s Street View photographs is certainly one we’ve never come across before.