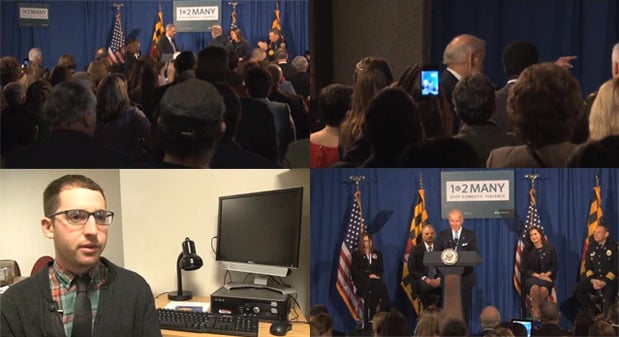 Vice President Joe Biden’s press secretary has apologized to a student reporter at the Philip Merrill College of Journalism’s Capital News Service after the journalist was forced to delete photographs he shot at a domestic violence event featuring Biden and other politicians.

In incident happened this past Tuesday. After credentialed reporter Jeremy Barr arrived at the event in Rockville, he mistakenly sat in a non-press area of the room. Over the course of the event, Barr shot a number of photos of each speaker.

Afterward, he was confronted by Biden press office staffer Dana Rosenzweig, who asked if he had taken any photos. When he said that he had, Rosenzweig informed him that he had gained an unfair advantage over other reporters by sitting in the non-press area, and that he would have to delete all of his photos. Capital News Service writes,

“She said, ‘I need to see your camera right now.’” Barr said. […] The staffer then requested to watch as Barr deleted the photos from his camera to ensure his compliance, Barr said.

After deleting the photos from the camera, the staffer asked Barr to show her his iPhone to make sure no photos were saved. Barr complied.

“I assumed that I’d violated a protocol,” Barr said. “I gave her the benefit of the doubt that she was following proper procedures.”

When what had happened came to light, the journalism school’s dean, Lucy A. Dalglish, filed a formal complaint with the press office. Here’s the letter:

Barr and Dalglish were quickly contacted by Biden’s press secretary Kendra Barkoff, who apologized for Rosenzweig’s actions and said that it was an example of “total miscommunication” rather than their press office’s policies.

Dalglish says that while the apology does help “remedy” the situation, Barr is legally entitled to file a lawsuit over the forced deletion and violation of his First Amendment rights.

(via Capital News Service via Poynter)

A Starry Sea of Cameras at the Unveiling of Pope Francis

Photographs of a Couple Who Have Been Married for 57 Years