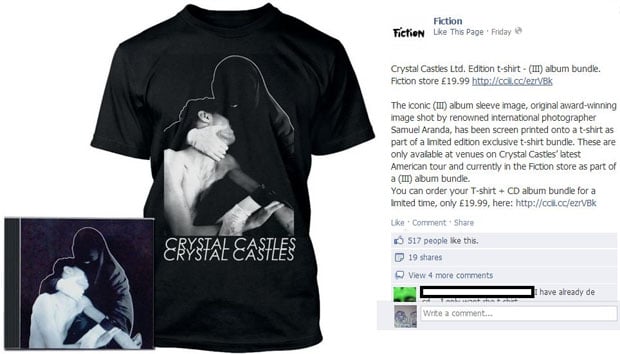 Madeleine Corcoran over at Duckrabbit has published a sharp criticism of photojournalist Samuel Aranda‘s decision to license his most famous conflict photo to Canadian electronic band Crystal Castles for use on their album cover and merchandise.

In the piece, titled “The blindness of photojournalism made crystal clear,” Corcoran accuses Aranda of lacking in compassion and being driven by financial gain:

If you believe in photojournalism, if you want documentary to work, as a photojournalist, photographer, artist, storyteller you are the defenders of the ethics and necessity of your practice. If you sell-out your images in this way, debasing the stories you claim to tell, trading in the bodies of people you claim to be an ally to, you deserve your industry to flop on its bloated, Cyclops-eyed face. If you cannot see beyond the money, you have no business engaging people in image making in their private moments of suffering.

What the use of this image on a ‘cool’ t-shirt has done is turn these people into objects to be consumed by people who are far more privileged than they. The objectification and consumption of a person’s story, which essentially figures a dehumanisation of that person, has been used to support and reassert the identity of a privileged group of people. The consumed people are fighting for their identity by protesting against an oppressive regime. The privileged group of people pose their ‘identity’ by purchasing a band t-shirt.

Aranda soon responded to Corcoran, saying that he had permission from the subjects and that he believes the album art will generate further awareness about what’s happening in Yemen:

First of all, I don´t understand that you publish an article about me, without contacting me in advance to ask for my answer. Is not really ethical in journalism, in case that you are a journalist. The language that you used is pure sensationalism. The answer to this “polemic” that you are trying to create is easy, I still in contact with the woman and her son, and they were agree on this. Also it was a personal interest from the music group to put the focus on this persons that during the last two years are fighting for their rights. So, I don´t see the problem anywhere, everybody was agree, and this photo published in the front of the album will arrive to many youth that will know about Yemen and the suffering of the civilians in this country.

Duckrabbit editors question whether Aranda did get prior permission, pointing to an interview published last year that seems to suggest otherwise.

The blindness of photojournalism made crystal clear [Duckrabbit]