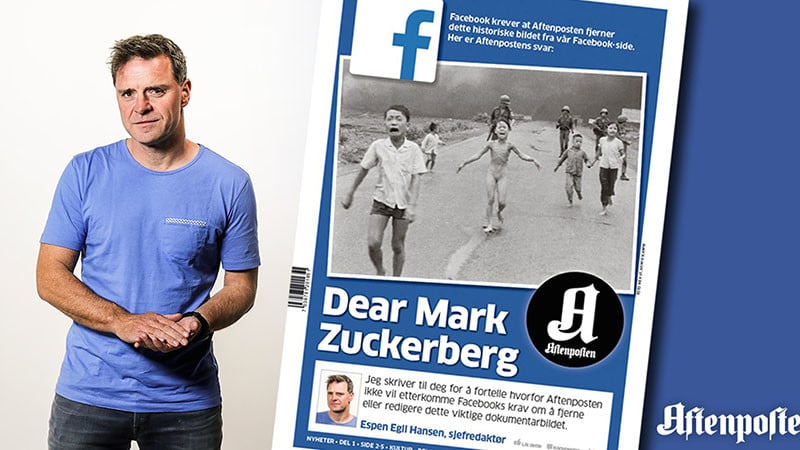 Facebook is changing its policies after a torrent of bad publicity and public outrage over its decision to censor an iconic Pulitzer Prize-winning photo. The social network will now allow photojournalist Nick Ut’s famous “Napalm Girl” photo from the Vietnam War.

The story exploded around the world yesterday after the editor-in-chief of Aftenposten, Norway’s largest newspaper, penned an open letter that slammed Facebook for deleting a post by the newspaper for showing the photo. Espen Egil Hansen, shown above with his cover story, also asked that Mark change Facebook policies in the name of free speech, arguing that it’s important for the health of a democracy.

Norway’s prime minister, Erna Solberg, also complained after having the photo deleted from one of her posts.

As the story spread far and wide, Facebook was accused of censorship and not being able to distinguish between a Pulitzer-worthy war photo and an indecent photo that inappropriately shows a nude child.

Facebook now says it recognizes the “global importance” of the photograph.

“In this case, we recognize the history and global importance of this image in documenting a particular moment in time,” it continues. “Because of its status as an iconic image of historical importance, the value of permitting sharing outweighs the value of protecting the community by removal, so we have decided to reinstate the image on Facebook where we are aware it has been removed.”

Facebook says it will also be reviewing its mechanisms and policies for determining how photos are accepted or denied in the future.

“It will take some time to adjust these systems but the photo should be available for sharing in the coming days,” the social networking giant writes. “We are always looking to improve our policies to make sure they both promote free expression and keep our community safe…”

SLO is a 35mm Camera Made Entirely with 3D Printing