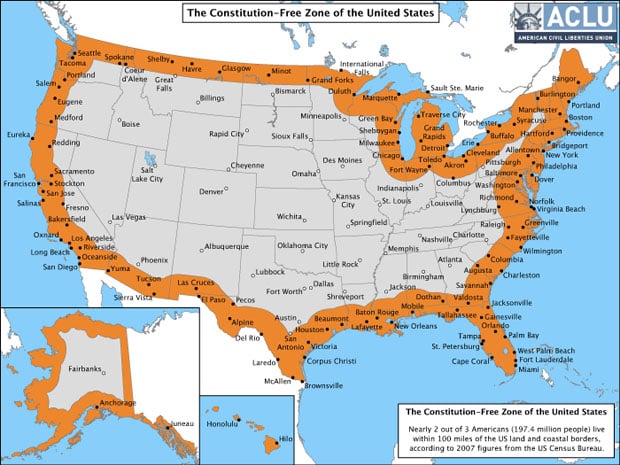 The ACLU writes that there’s a 100-mile-thick buffer around the borders of the US called “The Constitution-Free Zone,” in which electronic devices (e.g. laptops and cameras) can be searched and seized without suspicion. Wired writes that a man’s laptop was seized in this zone in 2010 and returned 11 days later:

At an Amtrak inspection point, Pascal Abidor showed his U.S. passport to a federal agent. He was ordered to move to the cafe car, where they removed his laptop from his luggage and “ordered Mr. Abidor to enter his password,” according to the lawsuit.

Agents asked him about pictures they found on his laptop, which included Hamas and Hezbollah rallies. He explained that he was earning a doctoral degree at a Canadian university on the topic of the modern history of Shiites in Lebanon.

This zone made quite a few headlines early last month. Scott Bomboy of the National Constitution Center looked into this issue, and concludes that the ACLU’s argument is confusing at best.

Thanks for sending in the tip, Geoffrey!