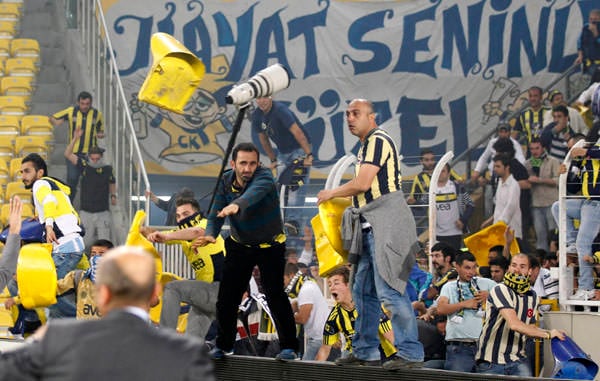 Reuters photographer Murad Sezer was shooting at an uber-important soccer final in Turkey last Saturday when he found himself in the midst of a massive clash between frenzied fans and police officers. In the chaos, fans started picking up everything they could get their hands on to use as projectiles, including camera lenses. Sezer writes,

While waiting for the trophy ceremony, the work room was packed with photographers – with evidence they had covered a riot. Broken cameras, lenses and laptops were scattered around as photographers tried to assess the damage while others tried to figure out if they were missing equipment. […] While we were editing and sending our pictures to the Singapore desk my colleague Umit Bektas showed me a picture he took during the clashes. It was hard to believe but a fan was throwing a Canon 400mm 2.8 telephoto lens with monopod, (worth some $10,000 USD) onto the field. In that moment of truth, I knew it was a good idea to lock my 400mm in a hardcase.

Lesson learned: shooting a soccer match in some places can be the same thing as shooting in a war zone.

Image credit: Photograph by Murad Sezer/Reuters and used with permission