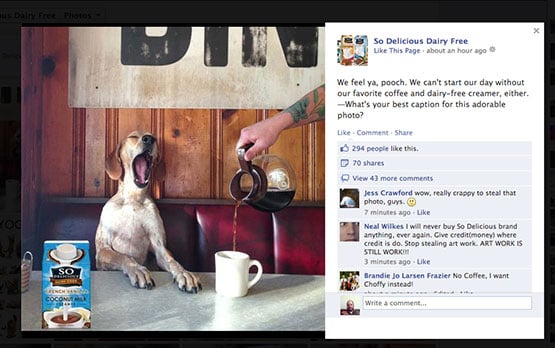 In a copyright dispute with So Delicious this past week, photographer Theron Humphrey chose to follow in Brandon Stanton’s footsteps and give the infringers a positive way out of the situation. Instead of getting the long arm of the law involved, Humphrey suggested that the offending company instead donate the money he was owed to charity.

Humphrey found his photo (top) used in a So Delicious ad on Facebook. But rather than send out a DMCA notice and get caught up in a legal battle, his solution was to have the company donate $10,000 to the animal shelter of his choice.

Both Stanton and Humphrey have said that their reasoning had to do with avoiding the court and time costs involved in pursing a copyright suit to its conclusion. For Humphrey, copying Stanton’s solution seemed like a win-win. In an e-mail conversation with PDN Pulse, he explains:

Brandon Stanton had a solid approach that helped a ton of kids. It felt right. It felt connected. And a lot of good came from it. I’m not sure if So Delicious feels the same way, but I think they got an amazing deal! They got a ton of love. And maybe when I’m out in Oregon we can collaborate.

But not everybody who has heard the stories sees the tactic in a positive light. Giving the infringing party solid PR, some argue, only encourages more of the same. It also doesn’t seem to drive the point home that stealing photos is, in fact, a negative thing.

As Humphrey soon learned, however, even his asking So Delicious to donate the money to charity wasn’t well-received by some Facebookers:

There are dozens of people commenting that I’m being a jerk and it’s not a big deal. Those same comments often have 30-plus likes. That in itself is an interesting glimpse into the minds of a lot of folks.

Whether or not the “charity option” is having a positive effect on people’s understanding of copyright infringement is up for debate. But it’s certainly a friendlier way to, in Humphrey’s words, “educat[e] folks to respect images and give them proper credit or ask for permission.”

For Sale: A Canon 1D Mark III and 600mm f/4 That Took a Saltwater Bath