The idea behind stop-motion videos is pretty simple: snap a lot of photographs in rapid succession and then string together all the images afterward to animate them. There was a time when the dominant photographic processes weren’t fast enough to create any meaningful kind of animation. Does that mean we’ll never see a stop-motion animation created using tintypes? Nope. The video above is one example of a stop-motion video created with a super old photographic process: the dry plate tintype.

Titled “Near the Egress,” it was created by photographer Antonio Martinez and shows a show at a circus. Martinez says he created the animation to “serve as a desired childhood memory of the circus, but through the mind of an adult.” 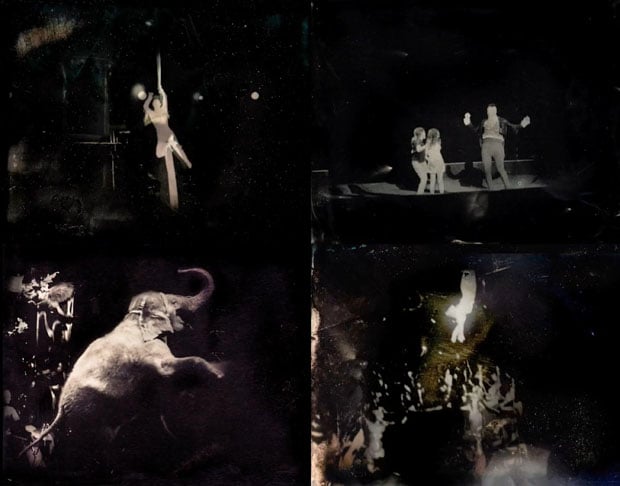 Over 800 dry plate tintypes were created in order to make up the frames of the video. Here’s the secret to the whole thing: the animation didn’t start with the tintypes. Instead, Martinez first shot the stills using black-and-white film, and then created tintypes using those frames.

Due to the unpredictable nature of tintypes and the difficulty in controlling exactly how they come out, the animation ends up having a very unique look as each uniquely created tintype bounces to the next.

The whole thing took five years to complete (from 2005 to 2010). It has since been shown at over 23 different festivals and was also selected as a Vimeo Staff Pick.

Tutorial: Creating a Photo of Syrup Being Poured on a Pancake Lens