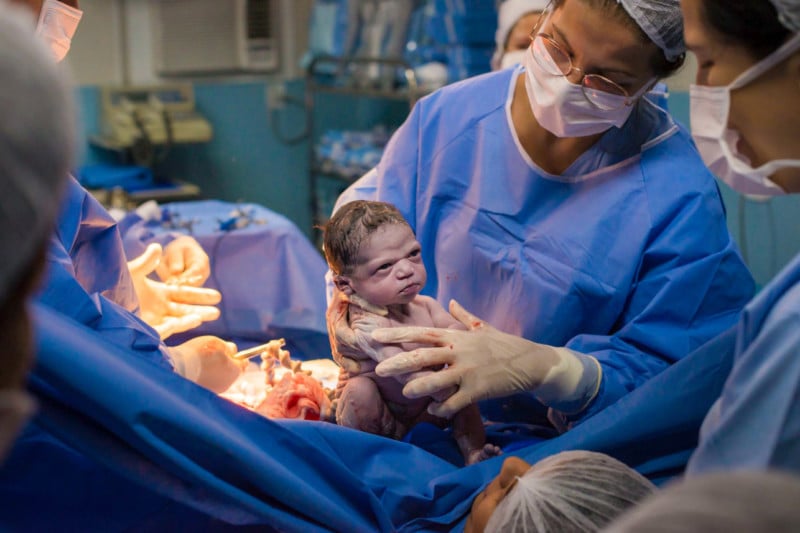 Brazilian photographer Rodrigo Kunstmann‘s life changed this week after a newborn portrait he captured went viral. The portrait of newborn Isabela Pereira de Jesus scowling during her delivery has become an instant meme as she stares daggers at the man who brought her into this world.

The photo was captured on February 13th during Isabela’s C-section, and it caught the world’s attention after Kunstmann shared it on his Facebook page. “Today is my birth and I don’t even have clothes for this…” reads the tongue-in-cheek caption:

The media quickly got wind of the post—which has received over 4.5K reactions and 621 shares and 452 comments as of this writing—and Kunstmann was immediately flooded by requests for interviews.

“I feel like a blessed person, I never imagined that a single photo could change my life and career,” he tells The Evening Standard. “I have been a photographer for 11 years, I hope I can inspire others to never give up on their dreams.”

As for Isabela, Kunstmann assures us that this was a single moment and not an indication of her permanent mood. “She’s very sweet,” Kunstmann told TODAY in a phone interview. “The picture was just a moment.”

Shortly after this photo was taken, after the umbilical cord was cut, Isabela did what newborns are supposed to do and uttered her first cry: Online reactions to the viral photo have been predictably entertaining. “Poor munchkin,” wrote one commenter. “She’s only been on the planet for a few minutes and she has had enough…”

To see more from Kunstmann, head over to his website or give him a follow on Facebook. Interestingly, Kunstmann doesn’t even typically work as a newborn photographer, preferring weddings, but this photo will probably change all that.

Get 10% Off Any Profoto Product at Adorama