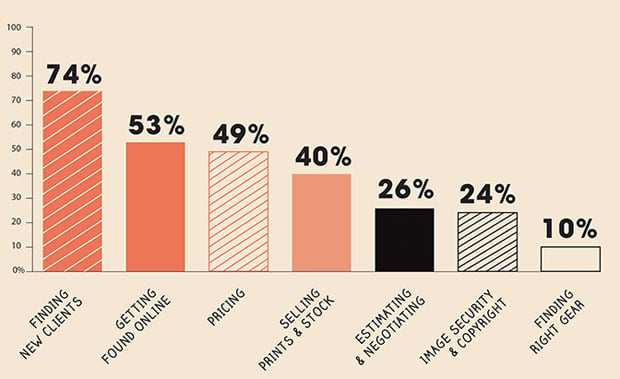 In late 2012, Photoshelter surveyed around 5,000 photographers to find out the industries outlook on 2013. Some of the findings were pretty interesting.

The chart above shows the top challenges the photographers think they’ll face in 2013. Only 10% of those who responded were worried about gear-related issues. People don’t seem to be having a hard time finding the right equipment to use for their shoots — it’s the business-side of the photography business that’s weighing photogs down.


The most worried-about thing is the task of finding new clients — something 74% of photographers said was their top challenge.

In terms of investing money in their photography, 93% of photographers said they will be shelling out dough in 2013. Here’s a breakdown showing where that money will be going:

Even though finding the right gear isn’t a concern for most photographers, 63% of respondents said they will still be dropping their hard earned cash on new equipment this year.

Workshops and courses geared toward improving your photography and business are apparently very in-demand these days.

How about the issue of marketing? How do photographers plan to get their work and their brand out there in order to attract prospective clients? Two of the biggest things this year are word-of-mouth marketing and social media (i.e. networking and personal connections are huge): 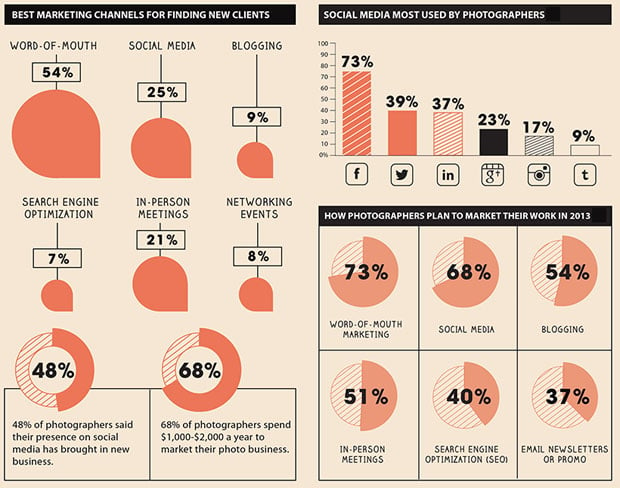 73% of the photographers will be using Facebook to promote their business this upcoming year. You might want to think about setting up an account there if you’re looking for a new marketing channel in 2013.

If you’d like to delve deeper into how professional photographers are feeling about 2013, Photoshelter has released detailed findings of the survey as a PDF. You can pick up a free copy here in exchange for your email address.

P.S. Here’s another interesting graphic in the survey results, showing the primary and secondary specialties the survey’s photographers are involved in: 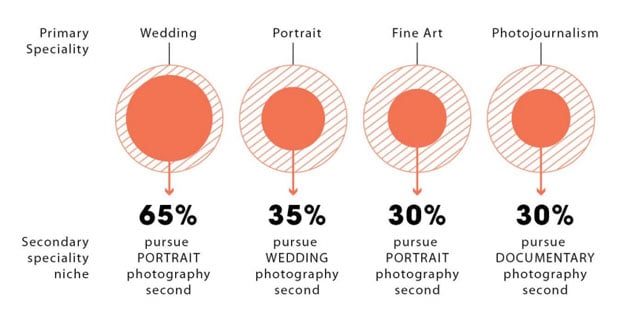