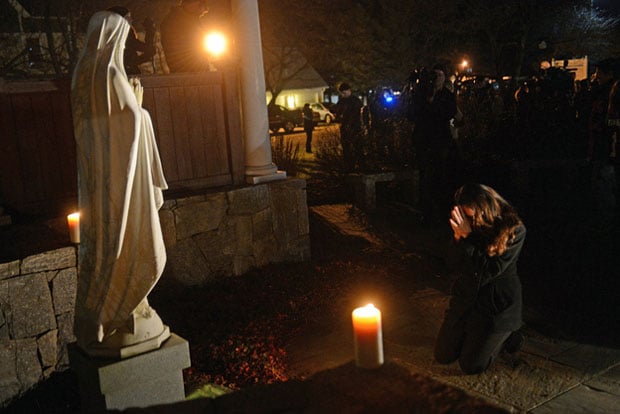 NPR sparked a debate regarding photojournalism, ethics, and privacy this past Monday after publishing a story titled, “What It Feels Like To Be Photographed In A Moment Of Grief” on its photography blog.

The discussion revolved around the photograph above, which AFP photographer Emmanuel Dunand captured in the evening after the school shooting in Newtown, Connecticut.

After publishing the photograph in a piece titled “Newtown Tragedy: Would A Good God Allow Such Evil?“, NPR received a message from the woman in the photo (whose identity wasn’t known at the time), Aline Marie.

Marie wasn’t pleased that her photograph had been snapped without her permission by a number of photojournalists, and subsequently shared around the world. NPR writes that Marie thinks permission should have been asked:

“I sat there in a moment of devastation with my hands in prayer pose asking for peace and healing in the hearts of men,” she recalls. “I was having such a strong moment and my heart was open, and I started to cry.”

Her mood changed abruptly, she says, when “all of a sudden I hear ‘clickclickclickclickclick’ all over the place. And there are people in the bushes, all around me, and they are photographing me, and now I’m pissed. I felt like a zoo animal.”

What particularly troubles her, she says, is “no one came up to me and said ‘Hi, I’m from this paper and I took your photograph.’ No one introduced themselves. I felt violated. And yes, it was a lovely photograph, but there is a sense of privacy in a moment like that, and they didn’t ask.”

NPR also got in touch with Dunand, who told them that he was simply doing his job of making photos to “help tell the story to the world.” He also notes that he didn’t ask for her name in order to not bother her and respect her private moment.

After the story came to light, hundreds of NPR readers left their thoughts on the matter. Many of the best comments were featured the next day in a followup article.

What are your thoughts on this issue?

The Beauty of Parkour Photographed with a Flash and Some Flour