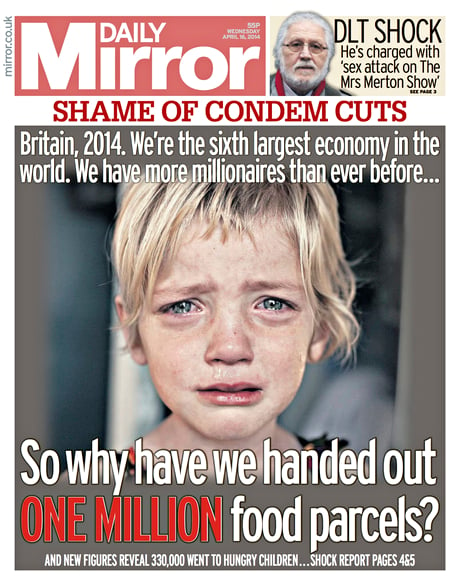 Photojournalistic ethics are serious business. While there are many styles of photography where heavy post-production is not just acceptable, but commonplace, the world of news demands accuracy and truth, and it is accuracy and truth that some are claiming were given a backseat to shock and sensationalism when The Daily Mirror decided to use a stock photograph to illustrate a front page story.

According to The Guardian, the controversy arose yesterday when its fellow newspaper published the front page you see above. The front page splash is about poverty and the growth of food banks in Britain, which is all good and well until you realize that the image used to illustrate the story is a five-year-old stock photo of an American child who was upset that her earthworm got away.

This has led to a debate over the ethics involved. The Guardian‘s Roger Tooth says the photo “smacks of lazy journalism at best,” and at worst is “a betrayal of their loyal readers and photojournalism past and present.” While Mirror editor Lloyd Embley commented with a sardonic, “And there was me thinking a million food parcels was the story.”

The only question left, then, is where do you stand?

To read further into both sides of the controversy, you can get the photographer’s perspective from Tooth at the Guardian Photography Blog by clicking here, and a broader discussion on photography, authenticity and emotion written by the Guardian‘s Andrew Brown here.

Flickr 3.0 for iOS and Android Gives The Mobile Experience Its Biggest Update Yet