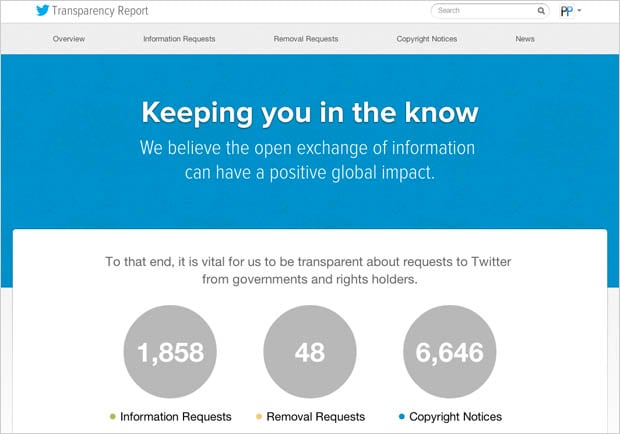 That last one is particularly interesting to us, because that website includes detailed copyright notice stats, putting copyright infringement on Twitter into raw numbers. Oh, and did we mention, copyright notices are by far the most common requests submitted to Twitter — over three-and-a-half times more frequent than government info requests.

Keep in mind, this is Twitter; when it comes to copyright issues, it’s no Tumblr. Still, the numbers show the extend to which copyright infringement (at least alleged infringement) has risen to on the microblogging platform.

As you can see, in the last half of 2012, Twitter received 3,268 takedown notices via their online DMCA form. Of those, about 53% led to stuff actually being taken down; and by stuff, we mean profile photos, header photos, background images, and Twitter-hosted media.

If 53% seems a bit low (who would go through the trouble of filling out a DMCA if it’s not a valid complaint?) that’s because Twitter is counting everything submitted through that form as a request — even complaints that should have been submitted elsewhere. Non-copyright complaints and complaints that don’t provide enough info for Twitter to find the offending account make up the majority of that unsuccessful 47%.

There are a lot more details on the website itself, which is definitely worth a look. Whether you’re looking for copyright stats or wondering how many times the U.S. Government has requested info from Twitter, you’ll find it there.

How to Turn Your Satchel Bag into a DIY Camera Bag