Photographer, blogger, and photographers rights’ activist Carlos Miller has made headlines quite a few times over the past few years with his legal rumbles with authorities over photography in public places. Miller, who often instigates the disputes for the purpose of bringing photographers’ rights into the spotlight, recently had another big confrontation with authorities in Miami (it’s not the first time it has happened).

The video above is Miller’s documentation of the incident. He says he was “attacked, choked, suffocated and handcuffed by 50 State security guards” for shooting photos and video on the Miami-Dade Metro rail this past Sunday night. 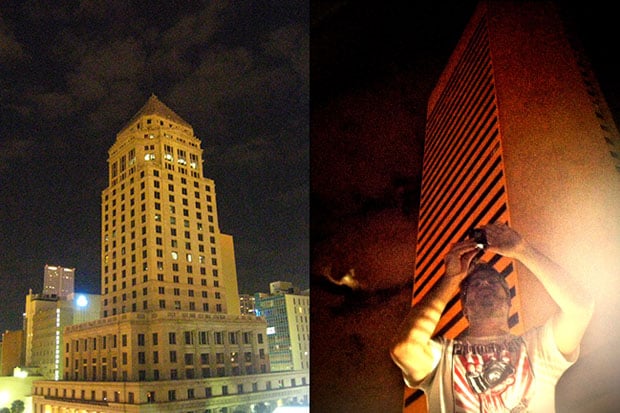 Miller says that they were spotted by a security guard and warned over a loudspeaker to stop shooting photographs. When they didn’t put their cameras away, security guards arrived to confront them. Miller then started recording footage with his phone, which resulted in the video above.

Here’s Miller’s account of how the alleged assault went down:

[The security guard] said it was illegal to photograph the rail portion of the train, which, of course, is complete hogwash. He then accused me of being drunk. I had three drinks in two hours while watching football and I am not a lightweight. They then told me I had to leave the Metrorail because I was drunk and I refused because I had not done anything illegal. I just wanted to take the train home. And I wasn’t drunk. He didn’t notice I had been drinking until he got close to me and he smelled something.

But as they started crowding me, I started walking towards the escalator. At the top of the escalator, one of them shoved me hard as if to push me down the escalator, which is when I shoved back. Then three of them piled on top of me, including one choking me where I couldn’t even breathe, leaving me gasping for air. When R. Myer walked up to us, I was hoping he would de-escalate the situation but he escalated completely. He is a tall black man who wears a USMC logo on his name badge. He was the one choking me. He wouldn’t have hesitated to kill me.

The two were handcuffed and detained for an hour until actual police officers arrived on the scene. The officers recognized Miller from previous confrontations. Miller and his friend were then released with a $100 citation for “producing loud or excessive noise.”

After arriving home, Miller shot this video to show the extent of the injuries he claims to have received at the hands of the guards:

Miller says that he is considering escalate his pending state lawsuit into a federal lawsuit. You can read his full account of what transpired over on his blog.