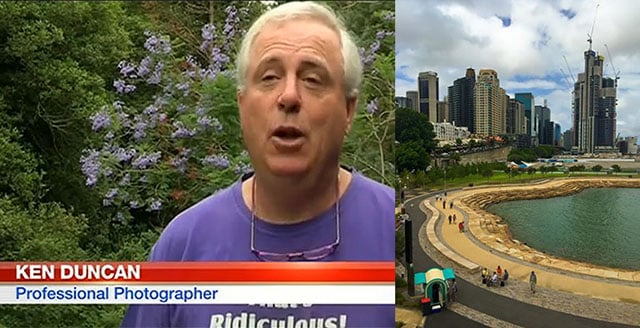 Ken Duncan, one of Australia’s most famous landscape photographers, is publicly fighting for photographers’ rights in Australia after being “nearly arrested” last Friday after being spotted by “Big Brother” while shooting on public land.

In a viral post on his Facebook page, Duncan writes that he was shooting at the newly opened Gosford Quarries reserve in Barangaroo, Sydney, when he was confronted by two rangers and told that he couldn’t take photos without paying a fee and having a permit. Duncan was taking a picture for the quarry without charge.

What a ridiculous day. I was nearly arrested for taking photos at Barangaroo in Sydney. I was there taking some photos…

Although the rangers sympathized with Duncan, they informed him that he was spotted by surveillance cameras taking pictures, and that management was forcing them to stop shooting.

“Go ahead and make my day, as people need to know how silly this is,” Duncan replied. “It will make a great headline for Barangaroo: an Australian landscape photographer arrested for taking photos.”

“So it is OK for you to video me without my permission but I am not allowed to take photos,” he stated.

“But you have a tripod, so you must be a commercial photographer so you definitely need to pay and have a permit,” the rangers replied, according to Duncan.

“That is discrimination against me being a professional photographer,” Duncan retorted.

Here’s a statement given to the Sydney Morning Herald by a Barangaroo spokesperson:

In this case, Mr Duncan and his assistant had set up on site and were asked by two Visitor Services security staff if they had permission for the shoot. The photographer said no. He was also asked for whom he was working. Our staff were told Mr Duncan was working for Gosford Quarries. It was made clear to our staff that he was a commercial photographer.

“Our staff then phoned the reserve manager who suggested that Mr Duncan contact Gosford Quarries and ask them to call him to discuss obtaining permission. No such call was received, so the security staff assumed Mr Duncan did not wish to obtain a permit. He was then asked to stop working until he had obtained the permit. Mr Duncan and his assistant left the park some time after.

It is incorrect to suggest that in such a situation the police would be called to Barangaroo Reserve.

Sydney’s 7News did their own investigation, and they too were confronted by authorities:

Duncan argues that photographers should be encouraged by the government to take pictures in public places, without any fee or permit restrictions, since the photos help to promote places and generate tourism.

“What is it with some bureaucrats, have they lost all touch with reality? They pay movie makers millions to do pictures in Australia to help promote Australia and then harass landscape photographers,” Duncan writes. “Well I for one am not going to back off on ridiculous or over zealous regulations.”

“Stand up for our freedom as photographers.”

Duncan is now writing op-ed pieces on behalf of photographers in Australia, urging people to stand up for photography rights. Oh, and he also published this 3-minute song titled “Bureaurats You’re Killing Us”:

How to Do Cross/Rembrandt Lighting with One Light