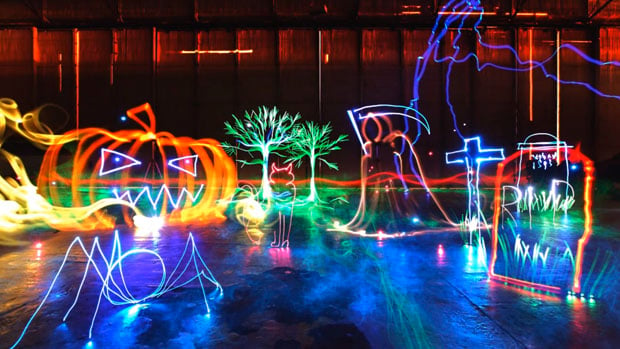 The photograph above is reportedly the world’s largest piece of long-exposure light art. It was created by light painter Michael Bosanko in a 35,000-square-foot aircraft hangar in Coventry airport in October 2012.


While it’s not difficult to find a larger space to create an even more ambitious photograph, Bosanko’s dedication is one of the impressive aspects of the piece: it’s a continuously drawn light painting project rather than a composite of multiple light painting drawings.

Bosanko drew everything in the photograph over the course of one hour while the camera’s shutter stayed open.

Here’s a behind-the-scenes video showing how the photograph was created:

Bosanko, 41 years old and based in Wales, first started doing light-painting back in 2009 after accidentally knocking over a tripod during a long-exposure photograph of a landscape. Since then he has built up an impressive body of light painting work that features drawings of everything from flowers to aliens.