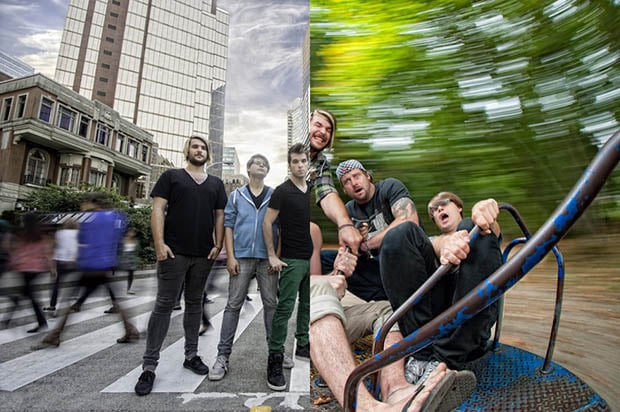 Here’s a behind-the-scenes look at how I recently created two band photos that feature motion and blur. The premise for this shoot actually started as far back as a couple years ago. I was on the search for a fun and energetic band with which to create a couple of promo images that featured motion. It took 2.5 years to find the right band for the shoots, but when 604 Records recording artists Fighting for Ithaca came calling, the perfect fit had been found!


The first shot that we had planned was to shoot the band posed on a crosswalk with pedestrians streaming past behind them. This proved more difficult than I thought it would be to find a suitable location.

All of the high-pedestrian-traffic areas I considered were also high-automotive traffic areas, making it fairly dangerous (no streets were shut down in the making of this image), and additionally, they all had street signs and traffic lights hanging over the crosswalks, cluttering up the scene.

After failing to find a suitable location based on pedestrian-traffic, I shifted my search to just finding the right crosswalk, and decided we would create the look of the pedestrian traffic ourselves. Fighting For Ithaca keeps a very open and inviting relationship with their fans, and so once I found a crosswalk that I liked, they put out a call to their ‘street-team’ the day before the shoot and we got some fans to come out and get to be involved in their promo pic!

On the day of the actual shoot, things went fairly smoothly. I plunked myself out in the centre of the road, put a couple pylons on either side of my tripod (you know… for “safety”), crossed my fingers that no cars would hit me, and away we went. Whenever traffic would lighten, the band would run to the center of the crosswalk, get in their poses, and then all the volunteer pedestrians would stream across behind them and I would snap away. A definite challenge of this shoot was getting the guys in the band to remain still enough that they were sharp, while dragging my shutter long enough to get a nice blur on the people walking through behind them. The final chosen image was shot at only 1/6th of a second, but the guys managed to stay still enough to be perfectly sharp! 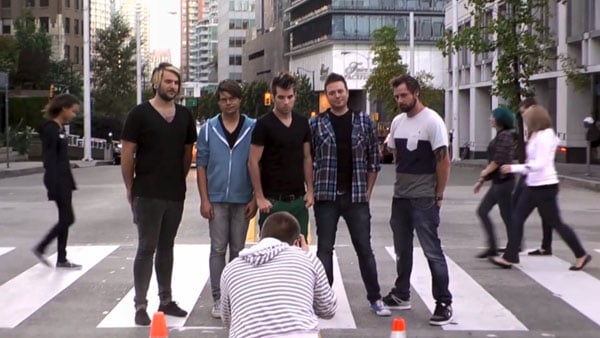 If you’re going to shoot an image at these kind of shutter speeds, you really need to express to your subjects just how still they need to stay! 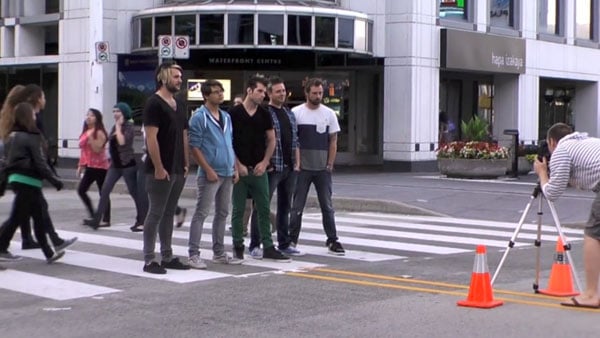 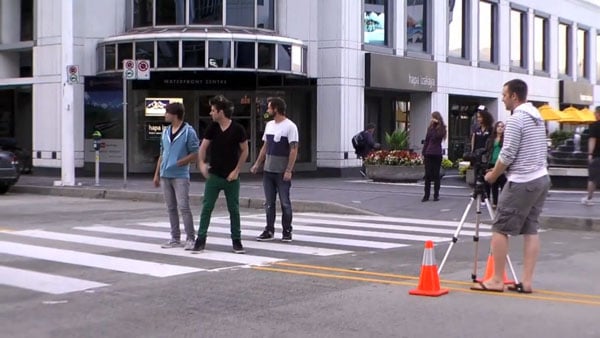 When it came to the edit, I selected what I thought was the best image of the band overall, replaced a couple of members from other shots, and then picked and chose pieces from the other shots to fill out the blurred people behind them. I did a sky replacement as well since it was a little drab!

Here’s a behind-the-scenes video we made of this shoot:

…and here’s the finished photo that resulted (click for a higher-res version): 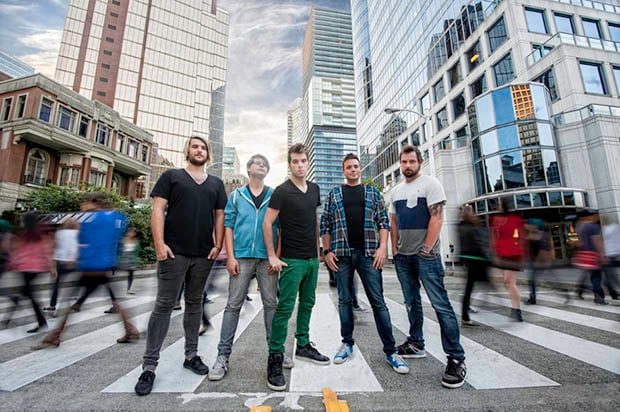 The second shot we planned was another image featuring motion. I wanted to pose the band on a spinning merry-go-round so that the background behind them was blurred from the speed of the merry-go-round spinning.

Challenge number one on this shoot was actually finding a merry-go-round to use! Here in Vancouver, they have been all but banned; they’ve been removed from almost every park, presumably due to the perception of them being dangerous.

After quite a thorough search, making intensive use of Google Maps’ street and birdseye view, I managed to find one, and a date for the shoot was set.

Challenge number two: upon arriving at the park, the merry-go-round was much smaller than expected, and they are a band of 5 big guys! I had hoped to actually not shoot the image with a fisheye lens, but I had brought one along just in case….and it’s a good thing I did! There’s no way I would’ve got everyone in the shot without it! But in the end I’m actually glad I used it as I enjoy the effect in this particular image. 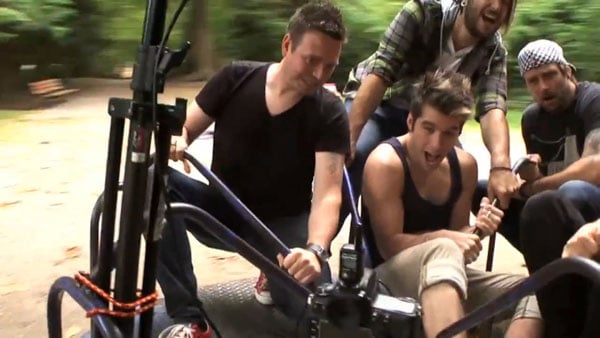 The merry-go-round image was also shot at a very slow-shutter speed — only 1/10th of a second. Getting the band sharp in this shot was even more of a challenge than the crosswalk shoot, because the spinning surface of the merry-go-round is nowhere near as stable as standing on a road! The guys were shifting around a lot as we shot, since the G-forces were working against them.

To help combat this, I used a strobe with a fast flash duration: the Alienbees AB400. At full power, this little strobe has a wicked fast duration of 1/2000th sec! They still had to do their best to hold very still since there was lots of ambient light as well, but it just helped to freeze them, in addition to giving nicer light on the band. I had the strobe stand bungee’d directly to the merry-go-round so that it spun with the band, and it shot into my 60″ umbrella on the reflective side. 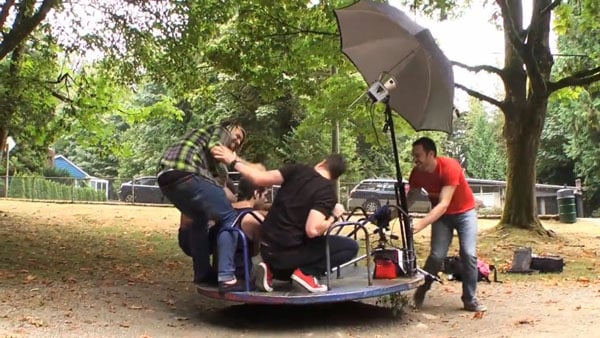 Here’s the behind the scenes video for this shoot: 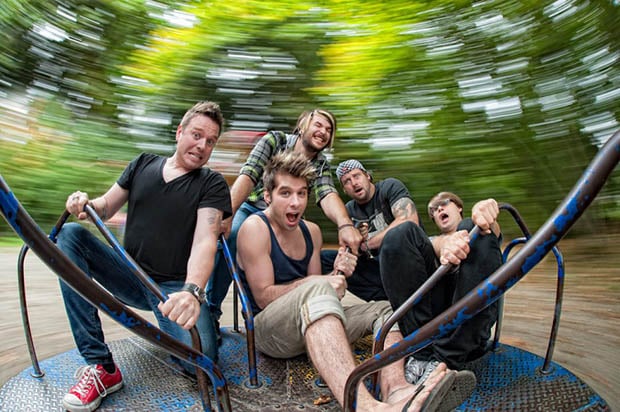 I had a great time shooting with the band on both shoots. Very fun guys, and we got some great results!

About the author: Matthew Neumann is a Vancouver-based photographer specializing in bands and musicians, weddings, and landscape photography. His photography business is called Phrozen Photo. You can also find him on Facebook and Twitter.