If the movie Jaws gave you nightmares, then you’re probably not well-suited to do the kind of photography that photographer Michael Muller spends his free time doing. Muller dives into the ocean and snaps close-up portraits of deadly sharks, often without a cage for protection. The video above is a short feature on Muller’s pastime by the TV show “Last Call With Carson Daly.” 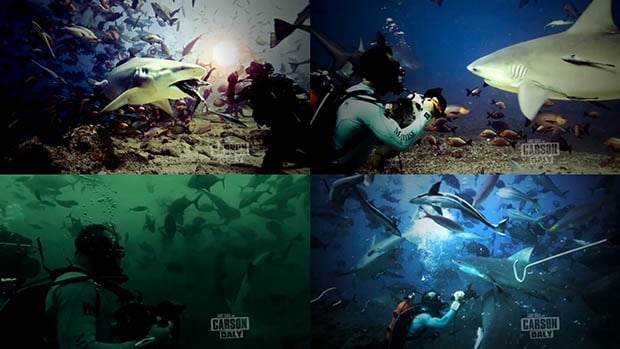 One of the things Muller talks about is how he brings a studio photography style to underwater photography, and how he created his own underwater lighting kit to do just that. Here’s what he recently told TransWorld SURF:

It started with underwater lights—specifically ones I invented about four years ago while I was shooting a Speedo campaign. At the time I was trying every underwater lighting system. In my head, I wanted to bring a Great White shark into the studio, and I was trying to figure out how to do that. At that point the strongest strobe I could find to use underwater was 400 watts, so I ended up getting together with a couple of guys—a fabricator and a mass engineer—and we were able to make a waterproof pro photo strobe head that uses 1,200 watts. We have six patents on it, and it allows me to bring a full-blown studio in the water.

You can find a selection of Muller’s shark photographs over on his website.