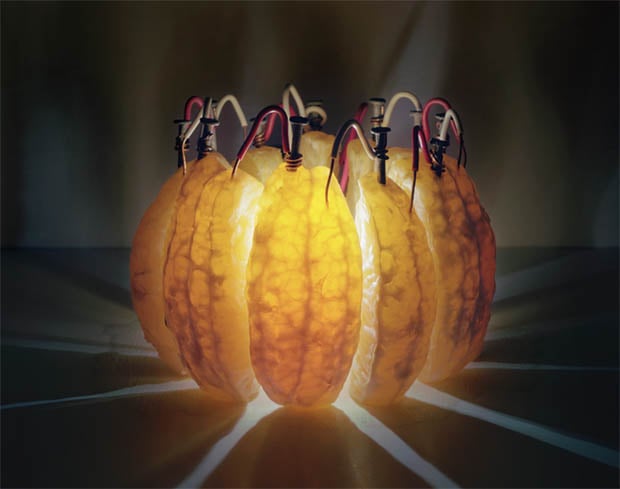 Photographer Caleb Charland is well known for his projects that mix science and photography. Recently he has been working on photos showing “alternative batteries,” or using things like fruits and coins to power lights. His latest image in that series is the above photo that captures the energy contained in a single orange.


The light seen in the frame is coming from an LED light held at the center of the orange slices. All the electricity comes from the orange itself: the nails inserted into the wedges react with the citric acid within them, and copper wires direct the generated power through the light.

Charland writes that unlike his previous images, he wanted to shoot one that involved only a single piece of fruit:

Recently one Sunday I spent the day at the kitchen table playing with oranges, copper wires and galvanized nails. My hope was that I could make this on going project work with a single piece of fruit. I tried cutting it into slices and wedges but that ever present voice in my head reminded me the SIMPLER IS BETTER. It only seemed logical to use the orange’s natural wedges as the cells for the battery. The wedges are held up-right with an armature of small wooden skewers.

There isn’t much juice — the electrical kind — inside a lone orange. Here’s how dim the light was: Charland had to keep his camera shutter open for 14 hours to capture the photograph seen above!

(via Caleb Charland via Colossal)