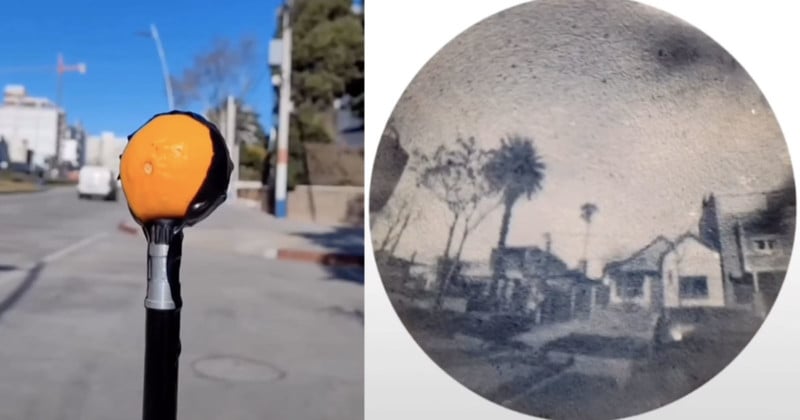 A viral TikTok video claiming that “oranges can take photos” proves that pinhole cameras can be made out of literally anything, including citrus fruit.

The since-deleted video was reuploaded to Reddit and by another TikTok creator. It starts by showing oranges being picked from a tree before one is selected and sliced in half.

It is then squeezed of all its juices and a black liner is put inside the two halves. A hole is made in the skin for the orange’s rudimentary lens and then a small sheet with a pinhole is placed behind it.

Viewers get a shot of a stack of oranges with tape holding together the sliced fruits, and with tape also covering the pinhole.

The citrussy camera is then taken out into the world and placed on a light stand, once again held with tape and not with the standard 1/4-inch thread.

Finally, the orange is thrown into a traditional film developer and the creators reveal the resulting photos taken on the clementine camera. The photos are classic pinhole shots; black-and-white, unsharp, and distorted.

The clever video never mentions the word pinhole or alludes to how the orange is really taking photos. Non-photographers may be heading to the store to buy clementines to take their holiday pictures on this year.

@dave_constine Oranges Can Take Photos 🍊 Oranges can take photos! Well, actually, they can’t, but you can use an orange to take photos. In fact, you can use pretty much anything to make a pinhole camera, the concept is exactly the same. A camera is merely a light-proof box with a hole to control the light entering (the pinhole in this case). First, cut the orange in half and squeeze out the juice. Line the inside of the rind with black construction paper. Cut out a little hole and put a piece of tape over it with another smaller hole in the tape. This is your pinhole. Then, put some film or light-sensitive paper inside, making sure the hole is covered until you are ready to take a photo. Now you just have to tape the two halves of the orange back together, mount it on a light stand, and hey presto, you have a small orange for a camera! It’s bound to draw some looks if you’re out in the street with this. To start with, if you are outside, open the pinhole and expose the film for 30 seconds then cover the pinhole. That should give you a good starting point. You can Google “how to develop film”. There are a lot of good options out on the market. Original piost came from a subreddit unmentioned in the video. #pinholephotography #pinhole #pinholecamera #pinholephoto #photography #orange #contentcreative #photagrapher #phhhoto #personalphotography #photograohy #visualcontent #phoyography #contentcreation #creativephotography ♬ original sound – Dave Constine Photography Tips

“So yeah, oranges can take photos. But, it’s not the oranges taking the photo, you’re actually making a pinhole camera out of an orange,” explains Dave Constine, owner of a photography tips page on TikTok.

“You need to have the round of the orange and it has to be black inside. So you use some cardboard and black paper, and then what you do is you take a piece of film.

The one step that Constine missed is the orange must be opened inside a darkroom where the photo-sensitive paper can be safely taken out without receiving any more light. The film paper is then processed by dipping it into liquid chemicals and the picture magically appears.

It’s clear that whoever made the video was having some fun by playing fast and loose with the truth while taking advantage of the mystical world of analog photography.