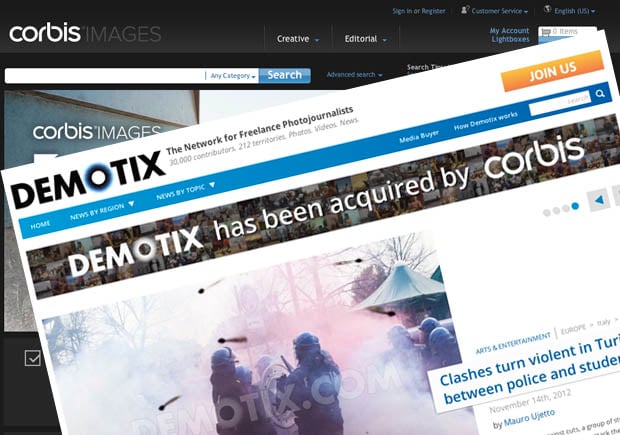 Corbis, one of the largest photo agencies in the world, has agreed to acquire Demotix, a crowd-sourced citizen journalism photo agency that was founded in 2008. Corbis had already picked up a piece of the young agency through an investment last year, but now it has decided to purchase the whole company outright. The acquisition price was not disclosed.

We wrote about Demotix once back in 2010 after it found itself in a dispute with the UK Press Card Authority over whether Demotix-issued press passes hold the same authority as press passes issued by more traditional news organizations.

The disagreement doesn’t appear to have slowed down Demotix’s growth: just last month the agency announced that it had passed the milestone of 1 million photos uploaded to the service.

Demotix acts as a middleman between news organizations around the world and freelance photographer who shoot news images. Mike Butcher of TechCrunch writes that the reach of the agency has become quite extensive:

They’ve produced some 75,000 stories from a user base of 35,000 users and 6,500 active photographers who are almost always closer to the action than traditional news bureaus, many of which have been cut to save strained media budgets. Demotix has community-based journalists in almost every country around the world, with particularly comprehensive networks in Europe, the Middle East and Asia – locations which complement Corbis’ existing network. Some 50,000 images go onto the service every month.

Buyers receive non-exclusive rights for images for prices ranging from $50 to $3,000. Photographers receive 50% of the sales and keep the copyright to the photographs themselves.

Demotix says that the acquisition will allow it to integrate better into Corbis’ global news operation and become a “truly competitive international photojournalism agency.” That seems plausible… as long as it doesn’t lose any of its citizen journalism mojo now that it’s under the arm of an 800lb gorilla.