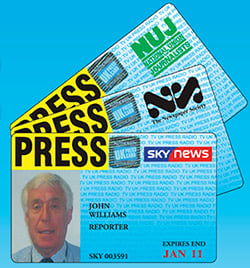 There’s a bit of bad blood going on between user-generated “street journalism” website Demotix and the UK Press Card Authority.

Over the past year, Demotix has issued press passes to select active citizen journalists. But now, the UK Press Card Authority, which issues press credentials for news organizations like BBC and SKY, warned that the press passes are not the same, nor should they be treated similarly to official credentials issued by the Authority. Furthermore, UK Press Card Authority chairman Mike Granatt said he would share his concerns with UK police and authorities, saying that the Demotix passes may appear similar to the official national press passes.

Our concern is that the police and third parties might be misled by the Demotix card. Its intention is confirmed by Demotix’s advice on their website, which suggests ‘ … walking up to the authorities with swagger, then shove the press pass in their face along with “that’s right, I have access to this event” grin on your face’.

No professional journalist would behave like that. And no one should encourage anybody to try to bluster their way past a cordon or into an event with this hobbyists’ ‘press pass’.

Turi Munthe, chief executive of Demotix, said he was upset with Granatt’s dismissal of the organization as “hobbyists,” adding:

These are serious reporters. We’ve verified each and every one, they’ve written 10 or more stories. We’re careful about the people we accredit, we’re responsible. If we have to deal with every single bottleneck organisation like this around the world it would take an enormous amount of time.

According to Amateur Photographer, Demotix contributors were notified via e-mail that the passes were available, reportedly for $20.

A hot issue here is the difference between a citizen journalist and a professional journalist — and whether and what distinctions should be made. According to the Demotix site description, many mainstream news organizations seem to see little difference; Demotix users’ photography has been featured on the covers of the New York Times, WSJ, and UK’s Guardian, and other content has been picked up by the AP, Reuters, and several television news outlets.

No Country for Small Men Dioramas