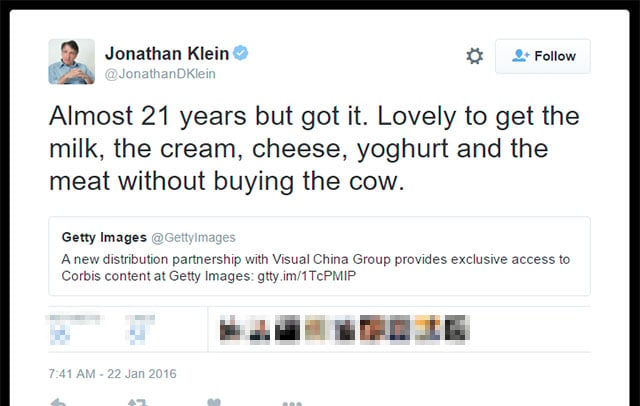 Corbis Images announced last week that it has sold its massive collection of photos — one of the largest archives in the world — to the Chinese company Visual China Group, which struck a deal with Getty Images to have Corbis images sold exclusively through Getty.

As many photographers wondered about the future of their images and paychecks, Getty Images co-founder and chairman Jonathan Klein took to Twitter to celebrate his success in getting Corbis’ images.


Klein likened Corbis Images to a cow that he’s been pursuing for nearly 21 years. “Lovely to get the milk, the cream, cheese, yoghurt and the meat without buying the cow,” he wrote, referring to the fact that Getty Images can now sell the entire Corbis Image archive without actually having to acquire the collection (VCG bought “the cow”).

The Tweet didn’t sit well with many photographers, and many have been slamming Klein online for his remarks. Here’s a sampling: 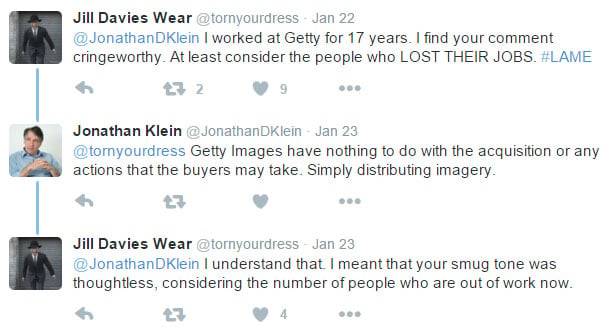 Photographers with Demotix, the citizen photojournalism agency owned by Corbis Images, have also been left in the dark after the sale. Demotix’s website currently redirects to Corbis Images, and photographers are scrambling to figure out the future of their Demotix work and income.

Quartz also points out that some of the most iconic and sensitive photos from China’s recent history are now under the control of a Chinese company. One such photo? The iconic “Tank Man” photo.

The Chinese government is known for censoring details related to the Tiananmen Square Massacre that the “Tank Man” photo shows. That photo, along with similar ones, are routinely scrubbed off the Chinese Internet when discovered.

“A bigger concern is that a Chinese owner might choose to restrict—or be compelled to restrict—the use of sensitive images internationally,” Quartz writes. “That would amount to, in effect, China’s censorship affecting a global audience. So far, nothing suggests this is likely.”

Correction: This post originally reported that the Tank Man photo was captured by Jeff Widener for the Associated Press. Actually, it was the Reuters version of this photo that was involved in this sale, not Widener’s version.