The 2012 election season is now over, and photojournalists who have been scrambling for many months on the campaign trail can now take a breather and reflect on their experiences. Reuters sent us the video above in which Reuters White House photographer Jason Reed offers a short 2-minute-long behind-the-scenes look at what it was like to photograph Barack Obama as he hustled around the nation, “from riding in motorcades through the streets of Manhattan to flying in Air Force One.” 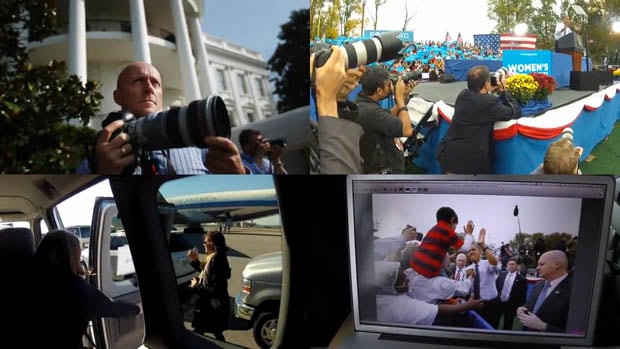 Just as the President has special call signs for the vehicles he rides around in (e.g. Air Force One, Marine One, Cadillac One), the media does as well. It’s a van with the call sign “Wire One.”

The days start early and last long, crammed inside our motorcade vehicle named “Wire One”, a tightly-packed minivan, which follows his limousine at high speed. But there’s no time wasted gazing out the window: in this digital age we are editing and transmitting pictures in the few moments between campaign events and our next flight.

Here’s a second reflection video in which New York Times photojournalist Damon Winter talks about his observations through photographing both of Obama’s campaigns (this year and back in 2008):