Well, this can’t be good for photographers’ rights: An anonymous man over in Seattle, Washington is causing a stir in his area and on the web by walking up to random people in various locations — both public and private — and sticking a camera in their faces to film them. When asked to explain his actions, he simply responds in vague statements such as “It’s OK, I’m just recording video.” 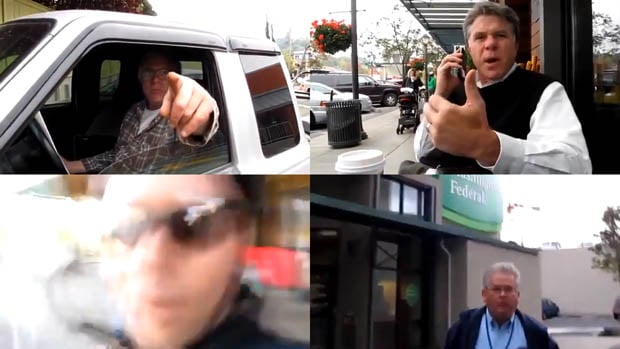 The Seattle Post-Intelligencer writes that the guy is making the point that similar intrusions of privacy by CCTV cameras slip by without any negative reaction from most people:

In most cases, people become agitated and tell him to stop. That’s when the cameraman makes his point: Cameras are everywhere already. This one just happens to be held by a person instead of mounted on a wall or traffic light.

The results are what you’d expect: extremely angry people, 911 calls, and encounters that seem to be one moment away from turning into a physical altercation. Here’s another of his videos, posted to YouTube under the username ScoperMedia (warning: there’s a lot of strong language in this one):

Technology blogger Brian Hall writes that what the man is doing may simply be a taste of the “upcoming brave new intrusive world,” in which people wearing cameras like Google Glass and Memoto will be able to photograph or film you simply by pointing their body in your direction.

(via GeekWire via Boing Boing)

An Arm’s-Length Self-Portrait Captured Millions of Miles Away