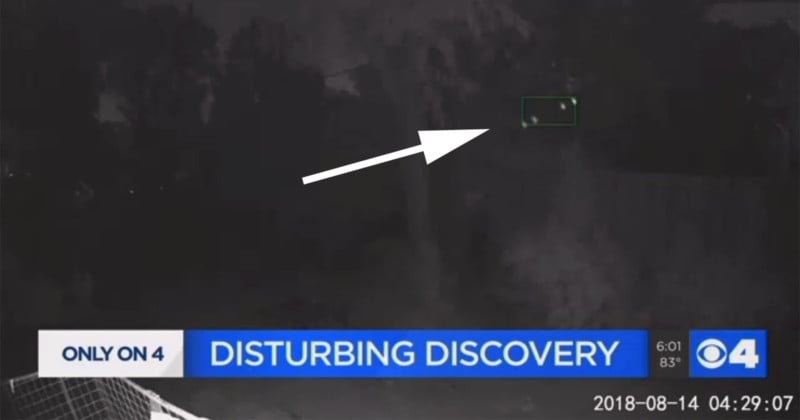 A woman in St. Louis, Missouri, is making local headlines with claims that her home surveillance camera caught a camera drone hovering outside her home at night and spying on her. Other people aren’t so sure that’s what her camera captured.

The local CBS-affiliate KMOV shared the woman’s story in a segment and article titled, “‘It’s disgusting’; surveillance shows drone flying outside woman’s window at night.” You can watch the 2.5-minute segment here.

The woman recently purchased and set up a Wyse Cam smart home camera on her back porch. The following night, she looked at the camera’s feed and saw what she says was a “drone being used to peep through her bedroom window.”

“The drone flies quite close to my camera,” the woman tells KMOV. “I’m really glad I know this was happening, instead of being inside and not knowing somebody was looking in.”

The captured surveillance video shows what appears to be four glowing points of light hovering up and down within the frame.

The woman also jumps to the conclusion that a man was piloting the drone to spy on her.

“It’s not going unnoticed and we want him to stop,” she tells KMOV.

But does the woman’s footage even show a drone in the first place? It seems many people online doubt it.

That footage does NOT show a drone.

This is an amazingly inflammatory and poorly researched article. The lights in this video are not a drone and appear to be a reflection. Drone's don't fly that way.

“Are you sure? No flashing lights, and I was unaware that a UAV can hover sideways,” one person wrote over in the drone pilot forum MavicPilots.com. “I see something but I do not see a drone.”

“I use IR trail cams for work and also home security and there are often similar artifacts,” another member writes. “[Y]ou can see between the two inner ‘lights'”

After some further discussion, a member who goes by lisadoc provides a plausible explanation: spider webs.

“I’ll tell you precisely what it is,” lisadoc writes. “It is an IR image of a spider web (a single thread) that is blowing in the wind across the frame of the camera lens. I’ve seen it hundreds of times before and recognized it immediately.

“It is why it moves at that angle, ‘hovers’ across the camera frame several times, and only appeared at 4 AM. The ‘lights’ are simply drops of condensation (or globules produced by thickening of the spider thread) viewed by the lens at a relatively close distance.”

Here’s a video showing what spider webs look like through an IR camera: the glowing orbs floating across the frame look strikingly similar to what the woman captured:

Similar photos were shared by a UFO sighting website last year, and a commenter in that article also pointed out that it’s almost certainly a spider web.

So if you ever see dancing lights in your IR security camera footage, you may want to take a closer look and do a little digging before jumping to the conclusion that a creepy man is using a camera drone to spy on you. There might be a less sinister reason for those lights.