Here’s a nice little video in which photographer Matthew Jordan Smith tells the story of a portrait session he had years ago with American actor/dancer/singer Gregory Hines. After finding himself in a sticky situation with a subject that wouldn’t offer the personality and emotion Smith wanted to capture, he reached deep into the knowledge of Hines that he had accumulated through his research; one particular fact saved the shoot.

Here’s the same story in text form in case you’d like to read rather than watch:

If you’re heard me speak then you know how big I am on research. Here a story on how my research has paid off in the past. Before this shoot I had my interns researching everything we could find on Gregory Hines. In this process we found that whenever he found himself alone in an elevator he liked to tap dance because he like the echo in an elevator. Okay, fast forward to the shoot. Gregory comes to the studio and one minute after walking in the door tells me he loves photography and that he loved the work of Henri Cartier-Bresson. Then he tells me that Bresson walked about Paris with one lens and one roll of film and believed if he couldn’t get a shot this way it wasn’t worth getting then asked if we could get the shot in one roll of film! He was totally serious! He wanted to shoot one roll of film and walk out the door.

So I’m shooting Gregory and each frame he starts counting down and I’m getting nothing. Then as we get to the last five frames I say, for the last few frames do me a favor and close your eyes and imagine your in a elevator tap dancing. He stops and says, “how did you know I like to do that”? Then bent down, took his shoes off and proceeded to give me two hours of the best images and moments I’d had in a long time. We connected at that moment and the entire room changed at that instant. 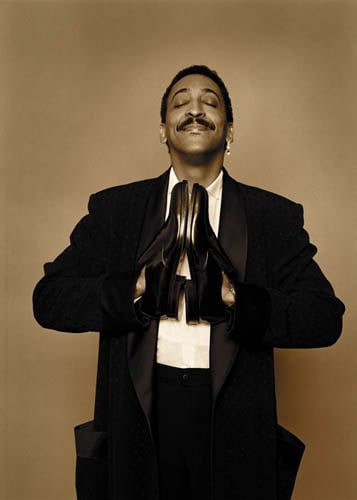