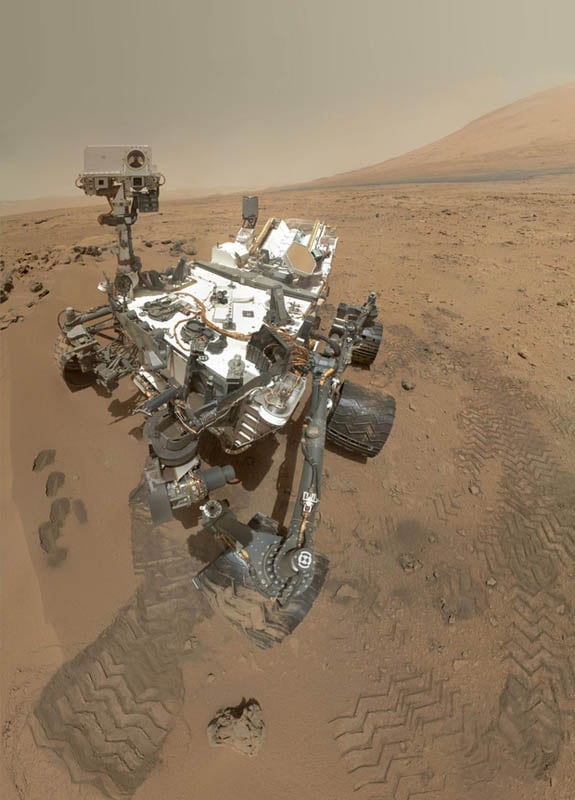 Facebook users here on Earth aren’t the only ones shooting arm’s-length self-portraits: NASA’s Curiosity rover over on Mars is doing it as well! Curiosity captured the image above a couple of days ago using its Mars Hand Lens Imager (MAHLI), which is attached to an extendable robotic arm. The image is actually a composite of 55 separate photos shot using the 2-megapixel RGB color CCD camera.

If you’re wondering why the arm itself isn’t seen extending into the photo — as is seen when we humans capture this type of shot — it’s because the arm can rotate out of the frame for each of the 55 smaller sections of the image, resulting in a stitched image that doesn’t show the arm at all.

The mosaic shows the rover at “Rocknest,” the spot in Gale Crater where the mission’s first scoop sampling took place. Four scoop scars can be seen in the regolith in front of the rover.

The base of Gale Crater’s 3-mile-high (5-kilometer) sedimentary mountain, Mount Sharp, rises on the right side of the frame. Mountains in the background to the left are the northern wall of Gale Crater. The Martian landscape appears inverted within the round, reflective ChemCam instrument at the top of the rover’s mast.

The space agency says that this type of self-portrait allows the scientists here on Earth to track the condition of the rover over time, since the MAHLI camera is the only one of the 17 cameras that can see certain parts of the craft.

You can find a higher-resolution version of the photo here.