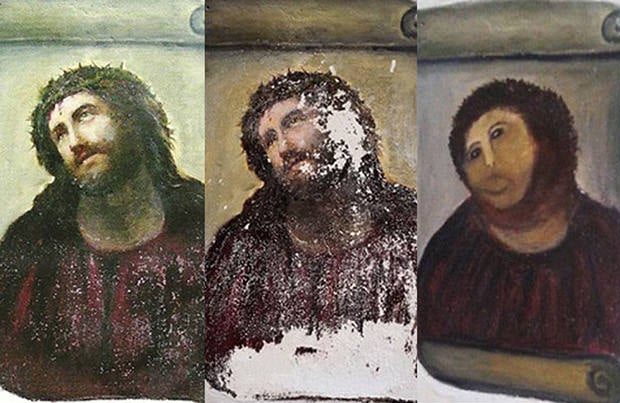 If there was such thing as a Photoshop disaster in real life, this story would probably qualify. An elderly woman in the city of Zaragoza, Spain recently took it upon herself to restore an 19th-century fresco of Jesus that had been deteriorating over the past few years. As you can see from the before and after photos above, the results weren’t pretty.

The woman was simply trying to do a good deed when she secretly took her paintbrush to the Elias Garcia Martinez painting, titled ‘Ecce Homo’. Although she didn’t have permission to do the restoration, she was apparently confident enough in her physical retouching skills to attempt it.

She claims that the project soon “got out of hand”, and the painting was left dramatically altered.

BBC Europe correspondent Christian Fraser says the delicate brush strokes of Elias Garcia Martinez have been buried under a haphazard splattering of paint.

The once-dignified portrait now resembles a crayon sketch of a very hairy monkey in an ill-fitting tunic, he says.

The woman appears to have realised she was out of her depth and contacted Juan Maria Ojeda, the city councillor in charge of cultural affairs.

Teresa Garcia, granddaughter of Elias Garcia Martinez, said the woman had painted the tunic before, but the fresco got disfigured when she painted Christ’s head.

The “restored” painting is currently being examined by professionals to see whether it can be restored to its former state. If it can’t, officials say they’ll probably replace the painting with an older photograph of the painting.

Update: Here’s an interview with the master retoucher herself (she seems like a sweet lady):