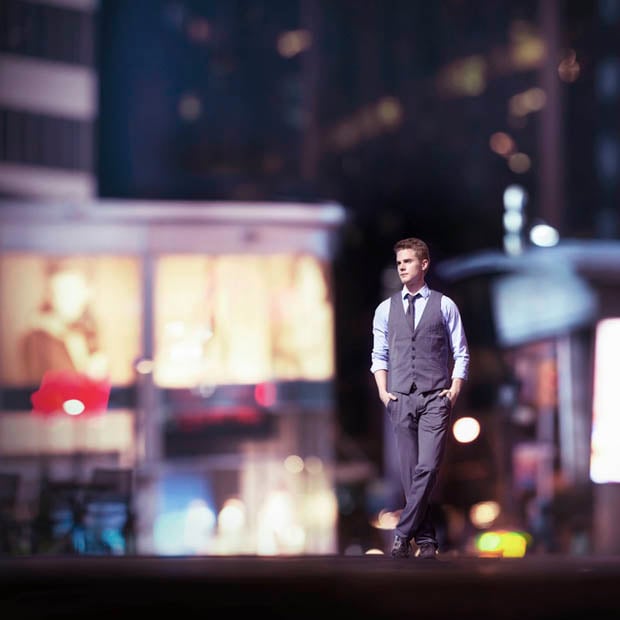 Photographer Benjamin Von Wong shot the portrait above a couple of days ago using a Nikon D4, a $9,000 Nikon 400mm f/2.8G lens, and a few iPhones for lighting. The extremely shallow depth-of-field was achieved using 36 separate exposures and the Brenizer Method.

Popularized by NY-based wedding photographer Ryan Brenizer (and coined by others who came after), the Brenizer Method allows you to achieve wider shallow-DoF images by combining multiple shots. Typically the trick is done with a portrait lens — an 85mm, for example — but it can be done with much longer focal lengths as well.

So what does one normally do with a 400mm f2.8? Sports… wildlife… that’s about it. It’s rare that the 400mm is used for portraits since it tends to flatten people’s faces and buddies inadvertently fattening them due to lens compression.

One of the things I had wanted to try out for a while but never quite got around to doing was to try out the Brenizer Method. The Brenizer Method consists of stitching together a bunch of shots taken from a telephoto at wide aperture to get an extremely shallow depth of field at a wider angle. Theoretically, all I would have to do is focus, set lens & camera settings to manual, swing my lens in a variety of directions capturing as wide a shot as possible, and later sit in front of the computer to stitch them together. This website explains it well if you want to try it out.

This Flickr pool has plenty of examples if you’d like to see what other people are doing with the technique.

You can read more about this project over on Von Wong’s blog.