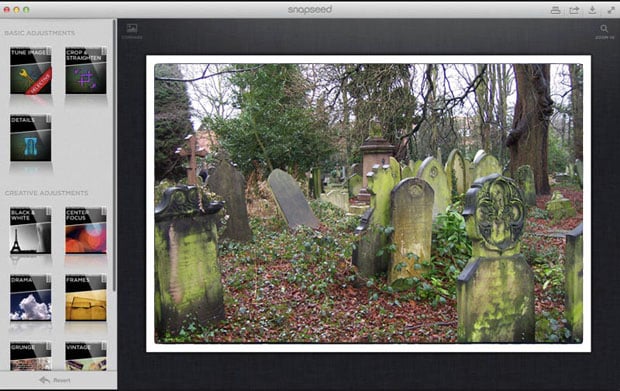 Google announced a new “spring cleaning” initiative yesterday through which some of the company’s not-as-popular apps and services will be terminated to allow attention and resources to be focused on the heavily used ones. The notice that sparked the most hoopla was the death notice for Google Reader, but another photography-related one was also included in the notice: Snapseed.

In what may be a sign of sad times to come for Nik Software fans, Google is saying that it will be abandoning Nik’s Snapseed for Desktop photo editing app.

Beginning today we’ll no longer sell or provide updates for Snapseed Desktop for Macintosh and Windows. Existing customers will continue to be able to download the software and can contact us for support. We’ll continue to offer the Snapseed mobile app on iOS and Android for free.

Pay a visit to the Snapseed website, and you’ll see that there is no longer any mention of a desktop version.

This news will likely cause frustration among photographers loyal to (and dependent on) Nik programs. When Google acquired Nik Software back in September 2012, many wondered whether it would mean the end of many of Nik’s offerings, since the giant companies of the tech industry have a nasty habit of acquiring hot companies, neglecting them, and eventually allowing them to die.

If you rely on Nik software as part of your photographic workflow, you should either cross your fingers and hope Google pays attention to Nik or begin looking for some alternative programs/plugins to fall back on in case Nik does get left by the wayside.

(via Google via The Phoblographer)

Image credit: Photo illustration based on Cemetary by srboisvert

Photographs of Wooden Beams Matching the Lines of Buildings