Angelo Sgambati is a fashion photographer based in Sydney. He has been a photographer for three seasons of the TV show America’s Next Top Model. Visit his website here. PP: Can you tell us a little about yourself and your background?

AS: I’m about to turn 28. I was born in Italy before my family moved to Australia when I was 5. I currently live in Sydney, Australia, but I have spent the last 2 years working around the world in England, Greece, Jamaica, Macau, Canada and Papua Guinea.

AS: From the time I left school to the early part of my 20s, I was trying to find out what I wanted to do, and what it was I was truly passionate about. I did so many things: working as an assistant stylist, studying fashion design, DJing, starting a jewellery line with my friend, freelancing in television production, working as an art buyer for an ad agency. Finally, I got a job as an assistant producer for a photography agency.

It was here that I bought my first SLR camera as an impulse buy during my lunch break. I had no idea how to use it so I did a couple of short courses. After a year of taking photos of my friends and winning a couple of awards, I decided that this is what I wanted to spend the rest of my life doing. It was the greatest moment of my life knowing that my search was finally over. When someone asked me what I did, I could now tell them with 100% certainty: “photography”. 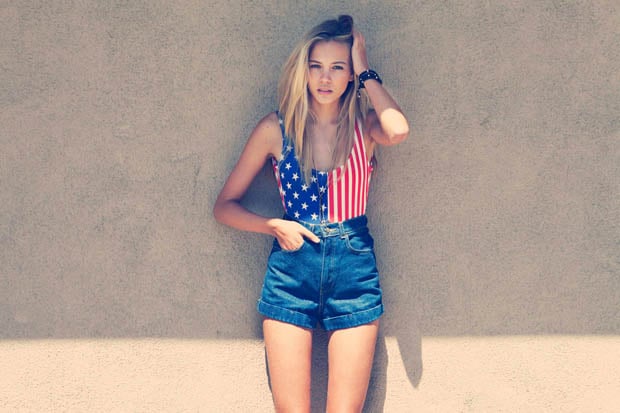 PP: How did your “big break” in photography come about?

AS: I was living in London earning £150 pounds a week working in a studio. I would go home at nights and troll through old emails, looking for possible contacts to chase up for work. I emailed my old boss Andrew Patterson from the photo agency in Sydney because I remembered having a conversation with him 6 months prior regarding him possibly coming to Europe for work. So I dropped him a line and said “hey”. Much to my surprise, he called me back 20 minutes later and told me he was in Frankfurt, Germany waiting for his connecting plane to go to Crete, where he was working on a TV show — but he couldn’t tell me which one. He then asked if I was free over the next few weeks, and if I could get on a plane the next morning and meet him in Crete to work on the show.

Of course I said yes.

So I hung up the phone bought my ticket, quit my job, packed my bag and boarded the 6:45am plane to Crete the next morning.

When I got there, I found out that I would be working on America’s Next Top Model and staying in a 6-star resort for the next 3 weeks! That was kind of the start for me and the first of my real photography jobs. A big thanks to my mate/boss/agent Andrew Patterson from Creative Style Kingdom for giving me the kick start that everyone who is starting out dreams of. 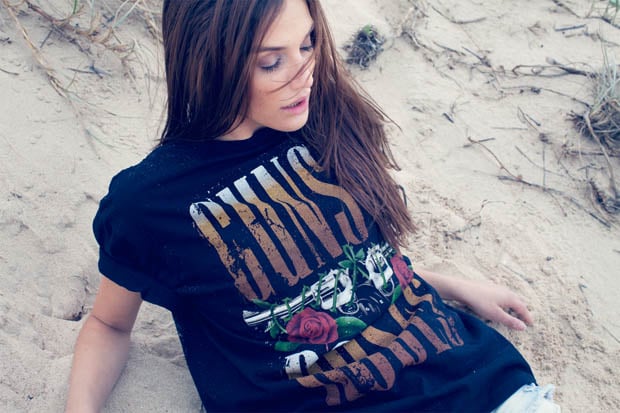 PP: What were your job responsibilities for the show? What was it like working there?

AS: Well, the first job I had when I got to Crete was as the photography assistant for all the photographers that came on the show. But by the end of the 3 weeks, I ended up shooting my own international marketing campaign for Bench Body Philippines, which had a segment on one of the episodes: This was my first shoot in Crete with Philippine model Georgina Wilson: 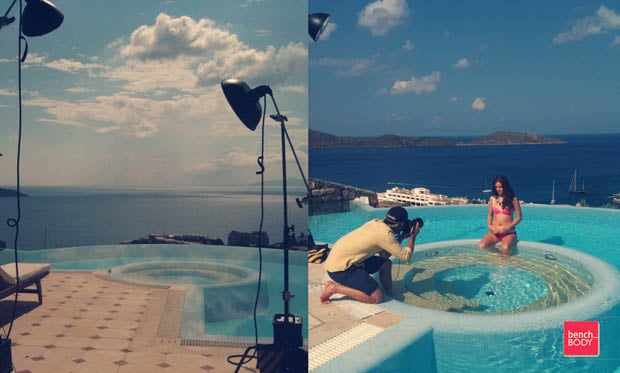 After the 3 weeks they asked me to work on the other 2 cycles with them as the photographic production manager. I also got to to shoot several segments on the show. The Cycle 19 marketing campaign I shot: Here I am on set shooting with Judges Rob Evan and Johnny Wujek: 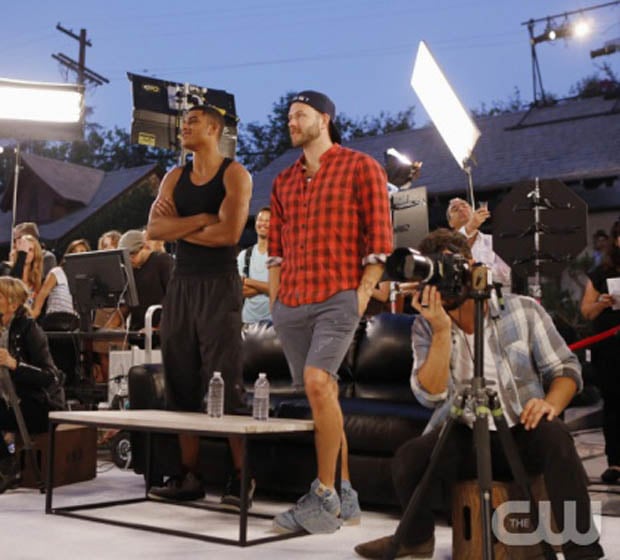 This is me shooting the makeover episode: 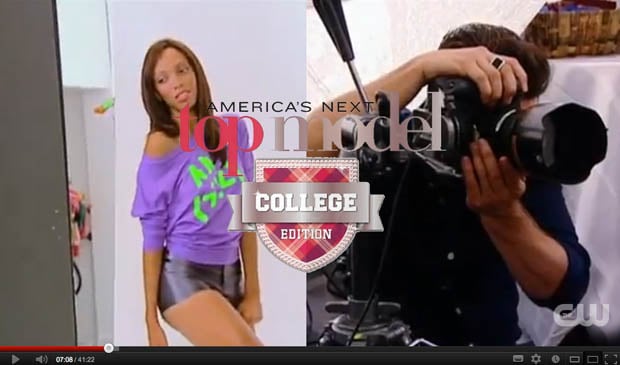 This is me shooting on set with Judge Kelly Cutrone in the background watching the girls: 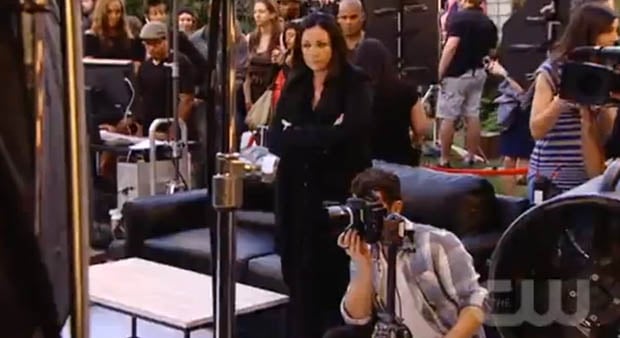 PP: We hear your work caught the eye of Tyra Banks. How did that happen, and what role did she play in this story?

AS: She’s the creator of the show and one of the executive producers, so all final decisions must go through her. She has the final say which photographers get to shoot on her show, so to be given the OK by her was a massive compliment, since she’s such a huge and widely respected figure.

ANTM very rarely reuses photographers on the show, so to be able to shoot 3 seasons in a row is something I will forever be proud of.

PP: Who are some of the portrait subjects you’ve photographed so far, and what was it like working with them?

AS: Photographing Tyra with all her people around was a really daunting experience, but she is very sweet and lovely and it only takes a few frames before you have an amazing shot. I got to shoot male super model Rob Evans who is one of the coolest and most down-to-earth people I have met. It was just like shooting one of my mates back home: we were completely relaxed and joking around the whole time. I also got to shoot PR powerhouse Kelly Cutrone who’s also fun and a great character. She is such a powerful women that a lot of people who work with her are intimidated, but once she sniffs you out likes you, she can be a lot of fun and a great friend. PP: What equipment do you use?

PP: What was the biggest challenge you faced when shooting for ANTM?

AS: Having to shoot when there were too many cooks in the room. There are so many different departments on the show, and so many people who have to sign off on things before they can be approved. This makes for a very unique and interesting working environment. Despite those things, it was a great learning experience in people management.

PP: What is the biggest lesson you have learned over the past few years?

AS: It’s not what you know but who you know. It’s very cliche, I know, but so true. It’s very important to build contacts early on in your career and to always be nice to people. All the photography jobs I have gotten have been through people I know or though referrals. I have never got a job through cold calling or on a job searching website.

PP: What advice do you have for aspiring photographers?

AS: Take risks and always say “yes” because you never know where that yes is going to lead you. PP: What’s the biggest mistake you’ve made so far?

AS: When I was assisting on a Vogue Italia job in Greece, the locals took me out the night before and didn’t get me home until 4:30am. I had a 5:30am start on the other side of the Island. When they picked me up, I was in such a rush that I forgot the cameras and laptops in my room! I didn’t figure this out until the photographer asked to do some test shoots with the camera. Luckily, I always carry my Canon 5D in my personal bag, so I gave him that until I had quietly arranged for someone to drive from the hotel to drop off the gear at our location. I will only ever make that mistake once, because now I am extremely careful to triple check everything before leaving for a job.

PP: What’s next for you and your career?

AS: I’m not really sure at the moment. I’m still focusing on building my portfolio to where I want it and am also working on a personal projects with Widows. I have a few jobs next year in the States so I’m sorting out visa’s at the moment which, if anyone has ever done before, can be quite daunting.