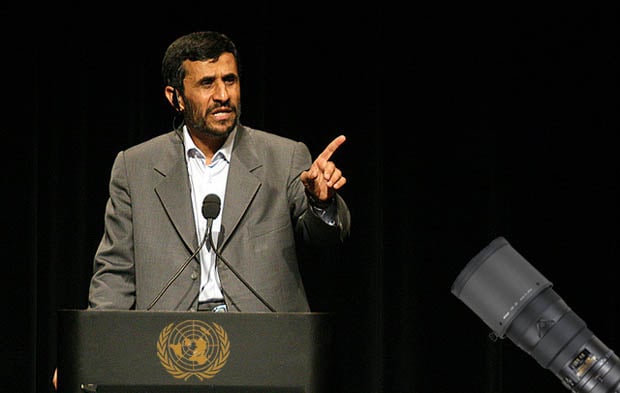 CNN reports that photographer Hassan Golkanbhan was traveling to New York to photograph Ahmadinejad’s UN General Assembly address when he decided to apply for asylum. Exactly what motivated him to do so is a bit hazy:

[Golkanbhan’s lawyer] said his client is afraid of persecution because of his perceived political beliefs.

“He’s perceived as not being a supporter, or being an opponent of the Iranian regime,” O’Dwyer said. “Somebody who has betrayed the regime and who can no longer be trusted by them.”

O’Dwyer said while the cameraman didn’t have any suspicion cast on him before his trip to New York, “there were things that he was expected to do that he was uncomfortable with doing,” and “while he was here… his position on certain things became known to the Iranian government.”

Golkanbhan’s wife and two children have reportedly fled Iran as well. The locations of the family members are tightly under wraps for their safety.

It’d be crazy if Golkanbhan accepted the photography position as part of some fancy plan to escape his predicament. Given how intensely presidential photographers are screened, though, it seems unlikely that was the case.