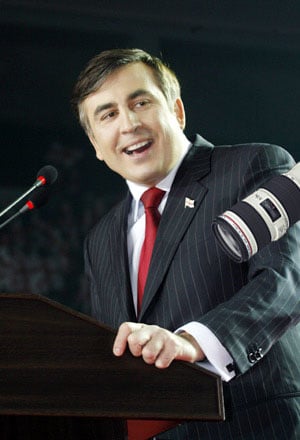 Last Thursday, three Georgian photographers including Irakli Gedenidze, the personal photographer of Georgian President Mikheil Saakashvili, were arrested on suspicion of spying for Russia by taking photos of secret documents. On Saturday, Georgian TV aired a clip of Gedenidze confessing to selling the information to someone he thought was a Russian agent, but claimed to be the victim of blackmail. The Moscow Times suggests that this may simply be an attempt by Georgia to “chill the media”.

The personal photographers of world leaders are sometimes given an extraordinary amount of access — President Obama’s photographer Pete Souza attends and photographs Obama’s meetings, and was present in the Situation Room while the Osama bin Laden raid was unfolding, allowing him to capture his now-iconic photograph.

How “Polaroid” Instant Film is Made