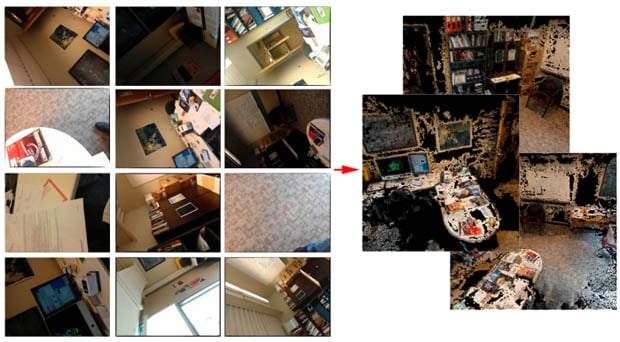 With the advent of Internet-connectivity and apps in cameraphones and digital cameras, images can now be shared with others in ways never before seen in the history of photography. Unfortunately, not all of the ways are positive. Some are downright creepy.

Take PlaceRaider, for example. It’s a malicious Android app that hijacks your smartphone’s camera, secretly takes photos of your life, and uses those images to reconstruct 3D virtual spaces of private locations.


The research paper published by the scientists behind the app states,

Through completely opportunistic use of the phone’s camera and other sensors, PlaceRaider constructs rich, three dimensional models of indoor environments. Remote burglars can thus `download’ the physical space, study the environment carefully, and steal virtual objects from the environment (such as financial documents, information on computer monitors, and personally identifiable information).

What this means is that hackers would be able to look into places you’ve been — standing at your bedroom desk, for example — and steal information as if they were actually there. An example given in the paper is the theft of your bank account information by looking at a check left on a desk:

The app, designed by Robert Templeman of the US Naval Surface Warfare Center and scientists at Indiana University, can run secretly in the background of any smartphone running Android 2.3 (after an unsuspecting “victim” launches the app, of course). It makes decisions on when to surreptitiously snap photos based on things like time, location, and orientation.

Useless images (ones that are too blurry or dark) are filtered out, while the rest are beamed to a central server, which creates virtual 3D spaces based on the content of the images. These 3D spaces can then be browsed by the person behind the malicious “hack”.

The whole thing isn’t just conceptual: the scientists actually gave infected phones to 20 oblivious test subjects, who were asked to use the devices like they normally would in office environments. The results were pretty crazy: 3D models were successfully obtained from every one of the 20 subjects, and it was easier to glean sensitive information from the 3D models than from the original photos.

It’s exciting that all kinds of cameras are getting “smarter” and becoming more Internet-capable, but at the same time it’s scary to think that hacks like this will become easier and easier as the industry continues in that direction.