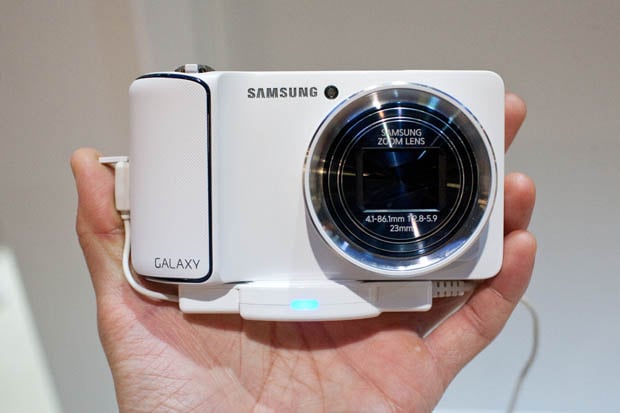 Played around with the new Samsung Galaxy Camera very briefly at Photokina last week. It’s basically a camera-fied smartphone that doesn’t do voice calling. It does have 3G/4G/Wi-Fi connectivity though, so it’s one of the first — if not the first — compact camera you can add a data plan to.

The first thing that came to mind when I picked the camera up was that it’s bigger than I expected. People wonder why Samsung didn’t just include voice calling in the device and make it a proper phonecamera (as opposed to a cameraphone), but when you have the thing in your hands, you’ll probably lose any desire to hold the beastly thing up to your ear. It’s pretty hefty, and the lens comes out of the body quite a bit.

The 4.8-inch screen on the back of the camera is gorgeous. It’s like you’re staring at a small HDTV while composing your photos. Unless you’re used to using an external monitor attachment, you’ll be blown away by how much screen space you have. 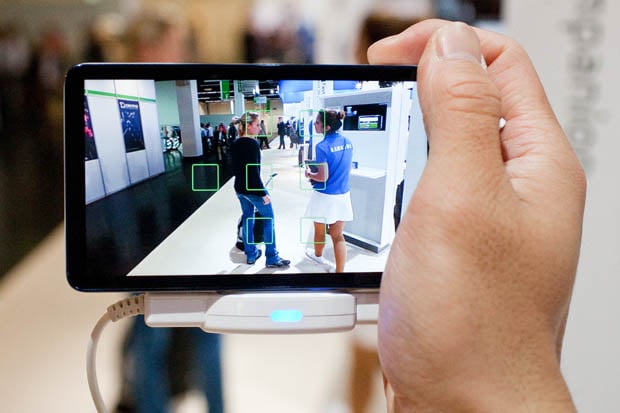 Ergonomically, the camera feels like an oversized phone with a grip attached to the side. Given that it doesn’t have any voice-calling capabilities, it’s strange that Samsung decided to stick with a smartphone-esque design rather than making it more camera-like and nicer to hold.

They could have definitely kept the same benefits of Android, Internet-connectivity, and the massive screen without having the camera feel like a mini tablet. 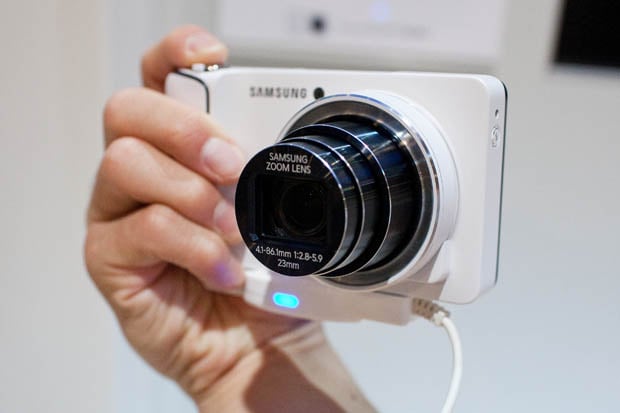 The big selling point for the camera is in the magic of apps and connectivity. Being able to run any Android app on your camera (something offered by a number of new cameras this year) opens the door to all kinds of awesomeness.

One demo that I saw was for the Group Shot feature, which appears to be another incarnation of Scalado Rewind (also implemented by Blackberry on their devices as “Timeline”). Snap a picture of a group of people, and the camera automatically captures a bunch of shots. You can then choose the best versions of each face for your final, seamlessly-blended photo.

Here are a couple on hands-on videos by Engadget and The Verge:

The introduction of smartphone operating systems, apps, and Internet-connectivity in new digital cameras is an exciting trend that has the potential to completely change the way people think about compact cameras.

In the end, though, the Samsung Galaxy Camera will succeed or fail based on whether it can differentiate itself somehow from the latest and greatest smartphones, especially since the sensor sizes inside the devices aren’t too different. It might prove difficult for Samsung to convince people to add include another hefty gadget in their pocket or purse. The Samsung Galaxy Camera doesn’t replace the cell phone, while the smartphone has done a lot to kill the compact camera.