Sending a camera up to the edges of space on a weather balloon has been done quite a bit now, but perhaps none of the projects have been as creative as Ron Fugelseth’s effort. Ron worked with his 4-year-old son to give his son’s favorite toy train Stanley a fun and exciting ride to space. They built a rig consisting of a weather balloon, a styrofoam box, an HD video camera, and an old cell phone for GPS. Stanley was then attached to the outside of the box using a rod, positioned so that the camera would be perpetually pointed at Stanley with the world in the background. 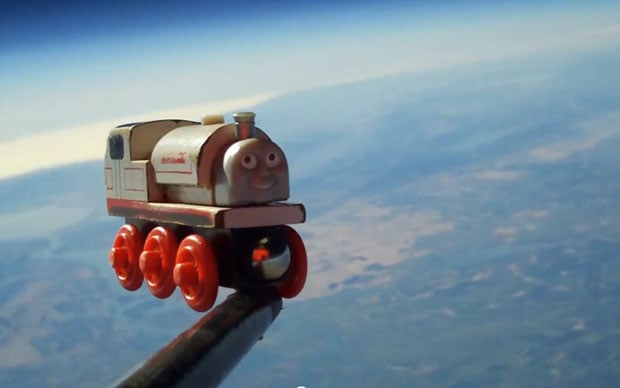 When Stanley got to 18 miles above ground, the balloon popped, ending the trip up and abruptly starting the rapid journey back down. Using the GPS information, Fugelseth was able to recover the rig 27 miles away inside a corn field.

He then took the BTS and journey footage, animated Stanley’s eyes, and created the beautiful short film seen above that documents the entire project from start to finish.

Fugelseth writes in the video’s description,

My 4 year old and Stanley are inseparable like Calvin and Hobbes. He’s been attached to him since he was two, and they play, sleep and do everything together. I animated Stanley’s face with After Effects and Photoshop to bring him to life how I imagine my son sees him.

Here’s the original video I made of my son and Stanley when he was 2 years old, same basic concept.

He also includes some safety tips and words for warning for anyone who would like to attempt the same thing:

First off, I called the FAA 15 minutes before launch (per their instructions) so they could make sure no planes fly into the flight path.

Second, the box was only 2 pounds and made of foam core, with a wooden dowel to hold Stanley in front of the camera.
I spent two months monitoring the winds with this website to pinpoint the general area that he would land. For safely, I launched him from a location that I knew would bring him down into farm land. The prediction website was only 5-10 miles off, so he landed safely in a corn field, far away from any towns.

I didn’t want Stanley to be a murderer. Plus I wanted to make sure my son got Stanley back. :)

Good job Fugelseth. You definitely deserve some kind of Dad Award for doing such an awesome project with your son!