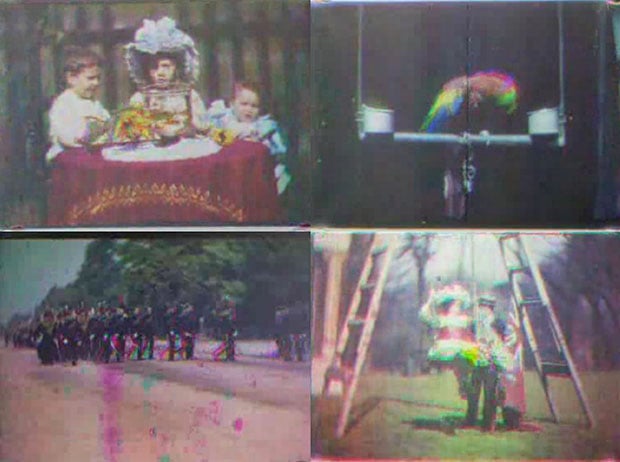 The world’s first color moving pictures have been discovered, dating back to 1902. The film sat forgotten in an old metal tin for 110 years before being found recently by Michael Harvey, the Curator of Cinematography at the National Media Museum in England. The pictures were part of a test reel of early color experiments by an Edwardian inventor named Edward Raymond Turner, and show Turners children, soldiers marching, domesticated birds, and even a girl on a swing set.


Turner had patented his color process a few years earlier, on March 22nd, 1899. Although his 1902 tests are considered to be a failure by film historians, modern digital technology has allowed researchers to unlock what the “movies” were intended to look like. Turner wasn’t able to develop his method much more after the initial 1902 tests, as he soon died of a heart attack.

Turner developed his complex three-colour process with support, first from [Frederick Marshall Lee] and then from the American film entrepreneur, Charles Urban. Using a camera and projector made by Brighton-based engineer Alfred Darling, Turner developed the process sufficiently to take various test films of colourful subjects such as a macaw, a goldfish in a bowl against a brightly striped background and his children playing with sunflowers, before his death in 1903 aged just 29. Urban went on to develop the process further with the pioneer film-maker George Albert Smith which resulted in the commercially successful Kinemacolor system, patented in 1906 and first exhibited to the public in 1909. Sadly, Turner’s widow never received a penny from her husband’s invention.

Until this recent discovery was made, the 1909 Kinemacolor films were considered by historians to be the earliest color moving pictures.

You can see clips of the 1902 test film in this video by the National Media Museum: