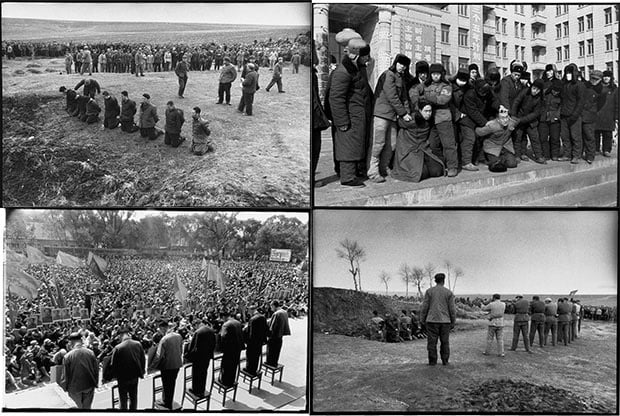 The New York Times has a fascinating interview with Li Zhensheng, a photojournalist who worked at a local newspaper in China during the Cultural Revolution. In addition to the “positive” propaganda photos he shot for his paper, he also captured “negative” photos that he kept hidden until decades later.

Most events I went to there were positive pictures and negative pictures. Some slogans were actually not all that positive but as long the crowd’s mouths were open and fists pumping air — that looks positive in the photographs. And I’d leave some film for “negative,” “useless” pictures. We were given film each month according to a ratio: for every picture published, we earned eight frames. I would process all my own film. And I did all my own enlargements.

[…] I knew I had lots of “negative” frames, so I would quickly dry them and clip them off, to not let other people see them. The only fear I had was the others would complain that I was wasting public resources, shooting pictures that the newspaper couldn’t use — and I would leave the positive ones hanging to dry.

I would put the “negative” negatives into brown envelopes in a secret compartment in my desk. In the spring of 1968, I sensed that I would be [searched] soon, I took batches of the negatives home every day after work. I sawed a hole in the parquet floor at home under desk and hid them there.

Li says he spent a week sawing the hole in his floorboards slowly, bit by bit, while his wife kept watch at their window. His secret photo collection is now one of the best records we have of what actually occurred in China decades ago.

9/11 Photographed From the International Space Station