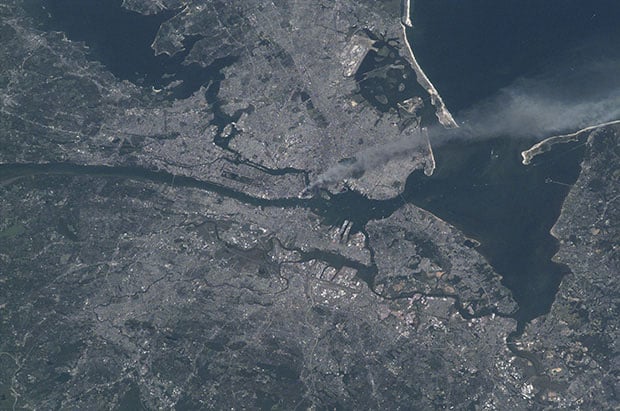 When the September 11th terrorist attacks happened exactly 11 years ago today, NASA astronaut Frank Culpertson was the only American not on planet Earth. Looking down at New York City from the International Space Station, he managed to snap the powerful photo above (high res here), showing the smoke plume from the World Trade Center site.

In a letter published by NASA last year, he shared some memories of what he experienced that day,

I glanced at the World Map on the computer to see where over the world we were and noticed that we were coming southeast out of Canada and would be passing over New England in a few minutes. I zipped around the station until I found a window that would give me a view of NYC and grabbed the nearest camera. It happened to be a video camera, and I was looking south from the window of Michael’s cabin.

The smoke seemed to have an odd bloom to it at the base of the column that was streaming south of the city. After reading one of the news articles we just received, I believe we were looking at NY around the time of, or shortly after, the collapse of the second tower. How horrible…

I panned the camera all along the East Coast to the south to see if I could see any other smoke around Washington, or anywhere else, but nothing was visible.

It was pretty difficult to think about work after that, though we had some to do, but on the next orbit we crossed the US further south. All three of us were working one or two cameras to try to get views of New York or Washington. There was haze over Washington, but no specific source could be seen. It all looked incredible from two to three hundred miles away. I can’t imagine the tragic scenes on the ground.

[…] It’s horrible to see smoke pouring from wounds in your own country from such a fantastic vantage point.

Here’s some video footage of NYC captured by Culpertson and the two Russian cosmonauts with him on the space station, along with some interviews and other video clips:

The day after the attacks, on September 12th, NASA’s Landsat 7 satellite captured this shot of New York City, still showing the “wounds”: 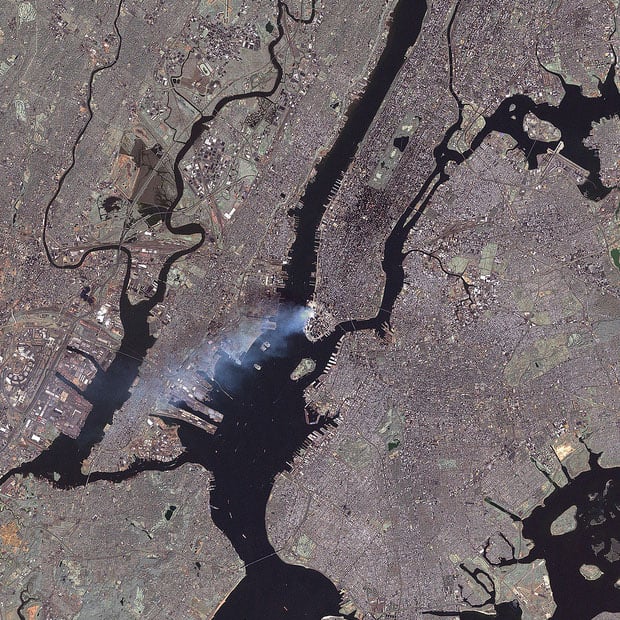 Chinese Man Hid “Negatives” Under His Floor During the Cultural Revolution