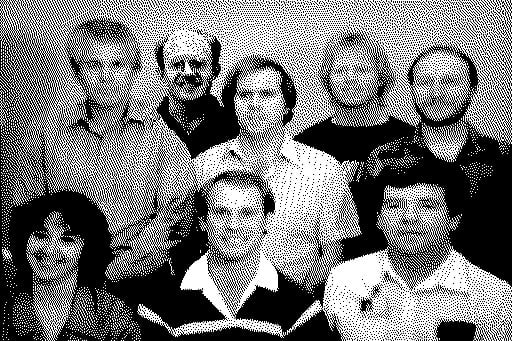 The people over at New York-based hackerspace NYC Resistor recently found an old Apple Macintosh SE on the side of a road in Brooklyn — a computer that was manufactured between 1987 and 1990. They decided to do a little “digital archaeology”, and came across something strange:

While digging through dumps generated from the Apple Mac SE ROM images we noticed that there was a large amount of non-code, non-audio data. Adam Mayer tested different stride widths and found that at 67 bytes (536 pixels across) there appeared to be some sort of image data that clearly was a picture of people. The rest of the image was skewed and distorted, so we knew that it wasn’t stored as an uncompressed bitmap.

After some investigation, we were able to decode the scrambled mess above and turn it into the full image with a hidden message from “Thu, Nov 20, 1986“.

After some further techie magic, they were able to unearth four black and white photographs showing the engineers that worked on building the computer for Apple 25 years ago.

Apparently, in the course of putting the computer together, the Apple engineers found themselves with some extra space on the ROM and decided to include some pictures as a fun easter egg. This lengthy post on the NYC Resistor blog offers a crazy behind-the-scenes look at how they managed to uncover these hidden images.

Who knows — maybe the latest Macbooks come with a photo of Jony Ive’s face baked into the hardware!