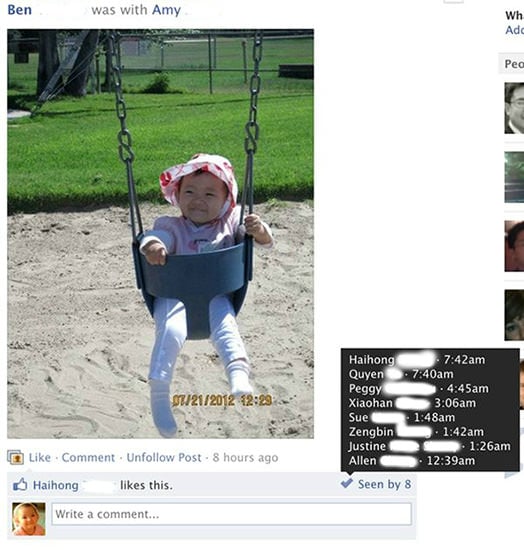 Facebook has rolled out a new feature that may make privacy-wary Internet users cringe. It’s a link called “seen by” that shows up under photos posted to groups. The link reveals a box that shows exactly who has seen the photographs — timestamps and all.

Ingrid Lunden of Techcrunch writes that UC Santa Barbara professor Ben Zhao first noticed the feature last Friday after sharing a photograph of his daughter to one of his groups.

Lunden decided to join the group herself, and discovered that she could see the entire “seen by” list under the photo as well. Apparently the info isn’t meant just for the photo sharers, but for the entire group images are shared with.

While the feature is relatively harmless when applied to groups, imagine what Facebook would be like if it one day rolled out to every photograph shared through the service. Having the veil of anonymity lifted would completely change the way people browse photographs.

Some users would be creeped out (or flattered) by the number of people viewing their images, while others would be dismayed to find their albums to be the Facebook equivalent of ghost towns.

Photographers who suspect plagiarism by another shooter would be able to prove their case by looking through the “view logs” for the name.

Don’t worry too much though: Facebook is the web’s largest photo sharing service (by far), and, given the personal nature of photo sharing, the decision makers at the company would have to be completely devoted to the art of “fail” in order to introduce such a privacy-intruding feature.