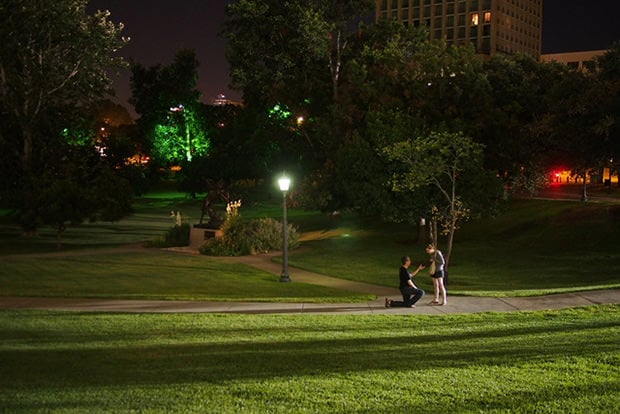 Photographer Patrick Lu always carries around his Olympus OM-D EM-5 camera around. “Every day. Everywhere,” he says. That came in handy last week, when Lu and a friend were at the capital in Austin, Texas. His eagle-eyed friend somehow noticed that a man nearby was about to propose, and Lu was able to snap some stealthy photos of the event, including the beautifully framed one above.


After getting home, Lu posted the photograph to Reddit with the question “Did any of you propose at the capital last night?”.

Over a thousand people quickly upvoted the story, making it the most popular ever on the /r/Austin subreddit.

Before long, the lucky new fiancee himself, a man named Joel Bush, was tipped off to the story. Here’s how he responded to the find:

Bush tells Mashable that he was happy that the photograph was a candid one, saying,

We experienced that magic on its own terms, with no thought about posing or anything. And, because the photographer did such an awesome job, we also have that precise moment and her beautiful reaction captured for safekeeping. It’s pretty priceless.

The mainstream media has also jumped on the story.

Lu is planning to hand the full-res version of the photograph over to the couple, and tells CNN that his low asking price is, “coffee and a slice of cheesecake.”