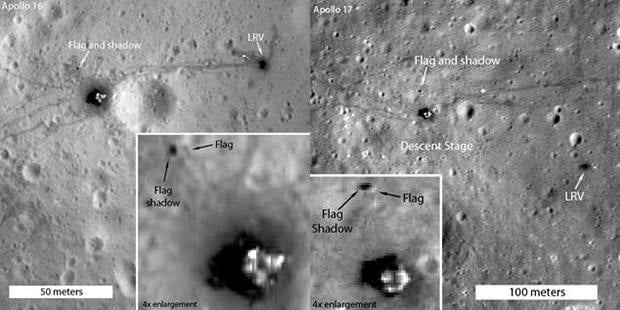 New photographs of the moon by NASA’s Lunar Reconnaissance Orbiter Camera reveal that flags planted by Apollo astronauts are still “flying” after more than four decades. Each of the six manned Apollo missions planted flags at their landing sites, and it now appears that all but one — the flag planted by Neil Armstrong was blown over upon their departure — are still standing. The photographs were taken at different times of the day, and show small shadows rotating around the locations where the flags were planted.

What the flags look like, however, is a different question: they’ve probably experienced a good deal of deterioration due to the ultraviolet light and temperatures found on the surface of the moon.

Photographer Guesses and Sketches the Lighting Diagrams for Famous Photos