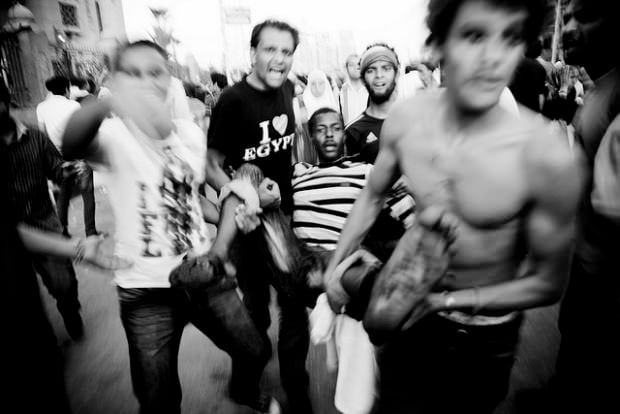 The Guardian featured a gripping article yesterday that asked photographers to look back at some of their most powerful photos, and how they could have helped instead of standing by and taking pictures. On the one hand we’ve all felt that surge of indignation as we wonder “why didn’t they help!?” On the other, only a photographer that has been there could understand what it’s like to be under that kind of pressure:

It was my first time in a conflict situation, and I was quite unprepared. I was on my own inside a migrant worker’s hostel in South Africa. Suddenly all the men started picking up spears and sticks and clubs, and racing off. So I followed them. They were trying to get into one of the dormitory rooms, and there was someone inside pressing against the door. Eventually, the door was flung open and this guy with a scarf tied like a turban around his head came dashing out. He looked me straight in the eyes, and then took off.

All these other men started chasing him, and he hadn’t gone far when he was brought down. About 15 or 20 men were all around him, hitting and stabbing and clubbing. And I was right there, photographing it. On the one hand, I was horrified, and at the same time I was thinking: what should the exposure be?

It was my first exposure to such a thing. And although, as a journalist, my reaction was fine, as a human being I felt I’d really let myself down. It wasn’t how I’d expected I’d react – I thought I’d try to intervene, or do something more noble. Yet I hadn’t. I was really quite torn up about that. I was gutted that I’d been such a coward

The article follows this and several other riveting stories that pit photojournalistic ambitions and self-preservation against humanity and the desire to “do the right thing.” Ultimately, however, the stories all beg the same question: What would you do?

‘I was gutted that I’d been such a coward’: photographers who didn’t step in to help (via Reddit)