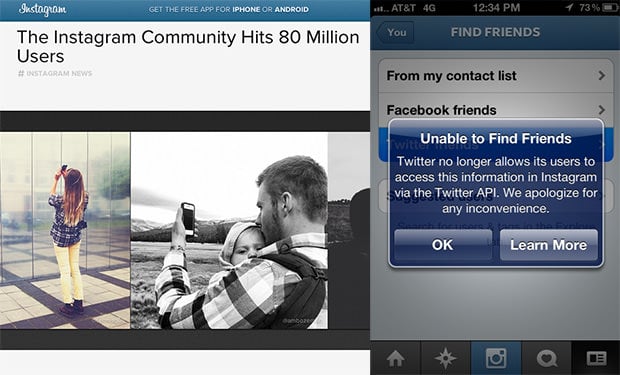 Mobile photo sharing powerhouse Instagram announced today that it has passed the 80 million mark for registered members. The service has grown by a whopping 30M since being acquired for $1 billion by Facebook in early April.

Here’s how the membership count has grown since October 2010:

We’ve learned that the feature is missing due to API restrictions from Twitter’s end, restrictions that possibly came about over concerns about Instagram’s scale and its strain on data pulls.

[…] Twitter’s agenda here isn’t at all clear, but one possibility is that it wants to control the photos experience on its platform (and preclude Facebook from doing the same). Selectively limiting API access by company is definitely strange behavior in an ecosystem that thrives on API symbiosis. Imagine if Google just decided to shut off Google Maps access to apps randomly?

P.S. The $1 billion acquisition price is now worth only ~$917 million due to Facebook’s plummeting stock price.

The Growing Trend of Retouching in Editorial Photography

The Pros and Cons of Using an LCD Viewfinder for Photography