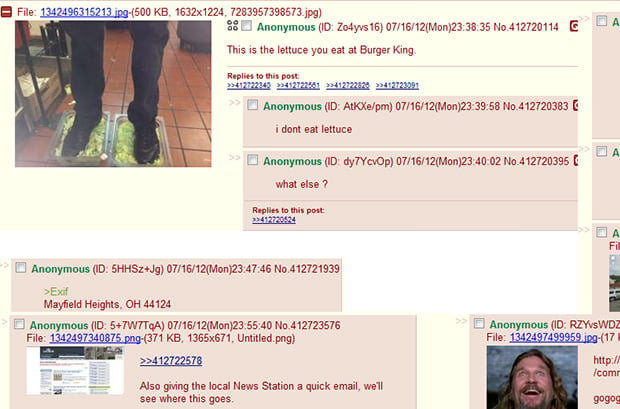 This past Monday, someone posted a photo to imageboard 4chan showing a Burger King employee stomping on two tubs of lettuce. The caption read “This is the lettuce you eat at Burger King.” Other tech-savvy vigilante users immediately pounced on the case in hopes of identifying the poster. Unfortunately for the lettuce defiler, the photograph was taken with geotagging enabled, allowing the EXIF data to be used to zero in on the precise restaurant where the image was created: 1475 Worton Boulevard, Mayfield Heights, OH.


Local newspaper Cleveland Scene then picked up the story and contacted the branch. Burger King soon released an official statement and announced that three employees (perhaps the stomper, picture-taker, and manager?) have been fired.